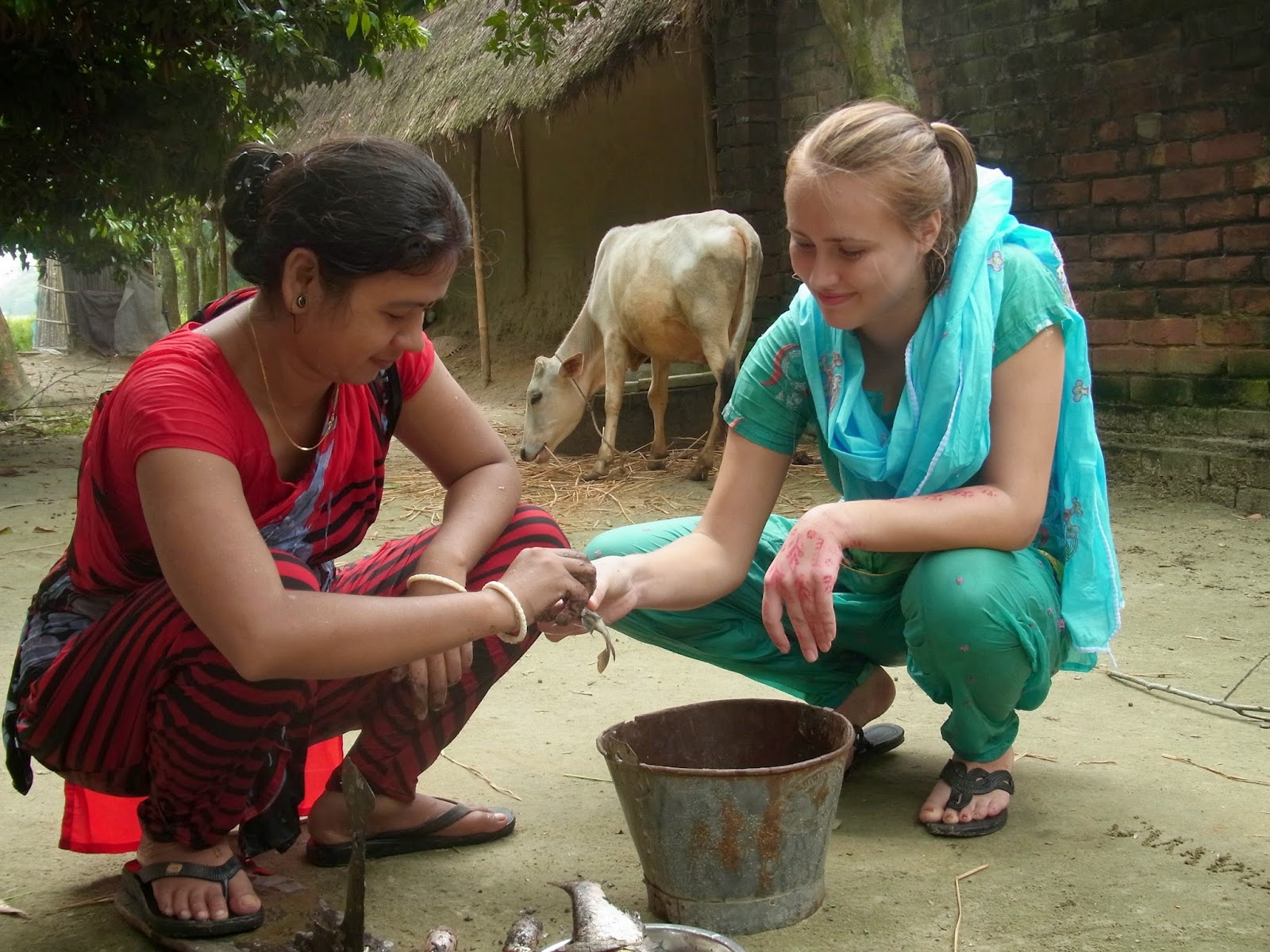 Actually Fernglück is a film mostly financed by television.  it was a brilliant idea to make a little tour through some German film theatres before its premiere at the television channel 3Sat. And it was worth to see it on the big screen.
To begin with , Fernglück, the most recent film by Bangladeshi-German filmmaker Shaheen Dill-Riaz is his finest piece of film since his shameless underrated masterpiece  Shilpo Shahor Shapnalok (The Happiest People in the World, 2005).
Even though Dill-Riaz spent the first half of his life in his native country Bangladesh and the second one in Germany (only interrupted through long travels to Bangladesh), he travels with us again to Bangladesh and there is not even a trace of smart alecky statements but pure cinema. As he follows some young German women and men who went to Bangladesh as voluntaries for developement aid, he does not give a statement about the encounter of different cultures, he explores them with his camera like he explored his new home Germany as a young man in the early 1990s. Even more important - he respects the idealism of the young people.He talks, listens to these young people and records their journey. In more than one way, it echoes his most personal film The Happiest People in the World where his own biography is confronted with the biography of some people in Dhaka (most of them close to him). Almost in the sense of André Bazin, in both of these films there is a confidence in film and its reflection of reality which does not need any ideological predetermination. Cinema seems here as a quest. Some questions are answered, others not.

I remember the night after the screening in Berlin which I attended with a friend. We talked the whole night about the film and its protagonists. In my memory they began soon after the film ended a life of their own. If something like that happens in a documentary film, that means for me always the evidence of having seen a great film.
If there are a trace of the philosophy of Shaheen Dill Riaz where I can put my finger on than it is one can understand himself better when one can understand the other.

the different reactions of these young Germany are captured equally. One young man will break up his stay in Bangladesh very early. Another young man who is first very motivated resigns after some months of demoralization. We see him searching in water samples from different water pumps in villages for the dangerous poison arsenic. All samples are negative and the young man doubts if the method of analyzing the water is properly at all.
Most of the young women seem to deal much better with the clash between their idealism and the local reality. One of these young woman gets friendly with a female teacher in a village but it is hard for her to accept her subordination as a woman to her family, as a second wife of a man. These confrontation of idealism and reality is often tragic. If these confrontations seem impossible to overcome, Fernglück unfolds as well moments of humor. There is this unforgettable tea house scene when one of the young woman talks with an old man about what is possible in Germany, how to love, marry or how to have relationships. The translator translates in his own way. At the same time we laugh about the predeterminations of the Bengalis and the Germans. But this laughter is not a laughter on the cost of these protagonists, it is a laughter we have with them together. Especially in these invincibly borders between two cultures, this laughter has a very special relieving character.

During the film was made, a tragic accident happens. A textile factory collapses with more than 1000 dead persons, mostly women. Some of the young Germans visit survivors in the hospital. One of the survivors, a young woman who lost an arm and was buried for days under the ruins of the factory before she was rescued. To a German woman with jeans and a Kurta she explains that these kind of jeans were made in these factories. The young German tries to cover with the Kurta her jeans with a bashful smile. This is a wonderful, almost John Ford-like moment about the borders between different cultures without any judgement. The young survivor has a strange and disturbing sarcasm.

In Dhaka manifestations against war criminals who were responsible for the genocide of Pakistanis against Bengalis during the Liberation war in the 1970s. Some young people, among them a German are demonstrating against the death penalty which is claimed by most of the Bengali protester. Very subtle, Shaheen Dill-Riaz build in information about the history of Bangladesh which is hardly known in Germany.
As the situations for the young Germans becomes very risky they will be sent back to Germany. Unfinished business but the film itself is a very rich journey and some of these young people will stay connected with this country.
True, there are still questions which remain unanswered for us, for the young Germans but as well for the filmmaker himself. But Fernglück answers the question what cinema can be,:a quest how to define the own place in the universe while confronted with the Unknown. Even though we know the world outside of each frame is very keen and not always easy to understand, in each of the film´s frame I feel a kind of protection – for the protagonists and for myself. This beautiful, tender, sad and sometimes funny piece of cinema belongs to the big screen and finally – it is with Patricio Guzman´s masterpiece El Botón de Nacár the first great documentaries of this year.


the film is still available in the mediathek of 3Sat (only in German and only available in Germany Switzerland and Austria)
Posted by shomingeki at 3:18 PM No comments: