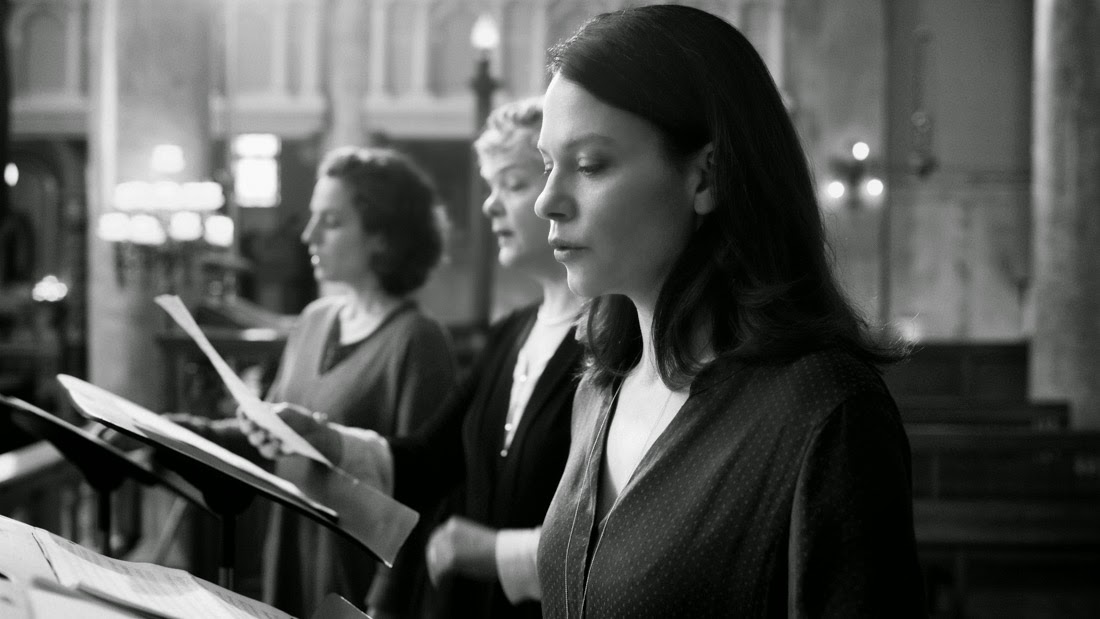 After their son was missing a couple Irene and Christophe got separated. Ten years later when the police finally finds the mortal remains of the boy, the have to come together again. He lives in Mexico and she is singing in a choir medieval polyphone songs.

A film in Black and White that evokes at the first glance in me two famous names from film history: Carl Theodor Dreyer and Yasujiro Ozu. And from Ozu especially his bleakest among his masterpieces Tokyo Boshoku (Tokyo Twilight, 1957). his drama about urbane life in Post War Japan.
While the Over voice monologues in Chorus reveals how the protagonists try to deal with their grieve and their loss the dialogues between Irene and Christophe, Christophe and his father or Irene with her mother are punctuated by pauses of silence. The dialogues have almost the character of a recitation. Talking is in Chorus a difficult work, every word is an effort. As a contrast to that, there is the beautiful and fluid choral music, a music where different human voices are in harmony with each other. These moments are like a distant echo of a harmony of life which is lost. The film moves often between the longing of its characters for being part of the world and their isolation from their environment.

The film opens with the confession of a pedophile prison inmate who has killed their son. It is a long scene where we see the murderer exposed to the camera and our view. Right at the end of the frame we see the police investigator. This confession is the last action of the perpetrator in the film. Later he will commit suicide. What we see at the beginning of the film is a person who is totally disconnected from the world.

Once invented for spectacular period dramas in competition to the rising television, this format was soon acquired by masters like Ophüls, several Japanese directors and and also the upcoming auteurs of the New European Cinema in the late 1950s. In a film by François Delisle, this mighty format is used very flexible. It can give in one scene an idea of the range of the world (Christophe on the beach in Mexico, his view in to the night heaven full of stars) or the mighty space of a church where the choir´s rehearsals take place) and in the next scene it can evoke a loneliness and a total isolation of the characters from the rest of the world. People seem captured with themselves and their own reflections. The images have often very soft contrasts but a lot of gray shades.
It is winter in Quebec and if there is one film beside Ozu´s Tokyo Boshoku which evokes the physical temperature of this season than it is Chorus. Sometimes it seems the people are only talking and moving to avoid freezing to death.
Iréne and Christophe are seen through the front window of a car which is nearly identical with the cinema scope frame of the film. I think there was a likely moment in Deslisle´s Toi from 2007. And like here and even if the couple shares the same space they almost look more lost than ever. There is only an echo of the close relationship they once had.

Iréne and Christophe try to keep the memories of their late son alive and sometimes this holding of memories seems to keep themselves alive. The murderer of their son releases a memory which has poisoned his soul. Irene´s mother refuses to cultivate memories at all. She tries to forget the death of her husband (who committed suicide), the death of her grandson and her daughter´s marriage she never agreed to.
Later Iréne visits a nursery for old people to meet the mother of the son´s murderer. But the old woman is dement and her memory is already in the process of decay. One last time the couple looks at their son´s possessions storaged in a locker before they finally give them away. When Christophe returns to Montreal, he lives at his father´s place. In the background we see often shelves full of books. Books are as well a storage of memories, the collective memories of a civilization like the sheet music of the medieval choral music and finally as well like chemical or digital recorded  images. Near the end they meet the class mate of their son who is 18 years now and for a moment memory becomes literally a living being.

The Visible and the Invisible

As cinema can´t visualize mental conditions, it needs the detour of bodies to give an idea about mental conditions.The face of Fanny Mallette´s Irene is close to Dreyer´s definition of the human face as a landscape. What she might feel can only be read in her face in sudden changes of expressions. That reminds me that Delisle´s women portraits are the most impressive ones I have seen in the last 20 years.
Sébastien Ricard´s Christophe reveals his vulnerability often through his whole body. There is a remarkable strong moment when we see him lying on the beach exposed to the tides of the ocean. Hoe the ocean waves move his almost passive body is a moment which stays in my memory. While Irene and Christophe are at any moment close to a breakdown, Genevieve Bujod´s (Irene´s mother) face is almost unmoved like Chishu Ryu´s in Tokyo Boshoku. All what she might feel, her grieve and loss is totally hidden behind her face and all her life energy seems to be consumed by the effort to forget all the pain in her life. The film has as well the character of a painting set in a cold winter landscape where each of its characters seem to be fight for surviving. Through the very banal fact that winter (and especially in Québec) is a physical very demanding climate situation we got more ideas about the mental condition of the characters.

At the end, the couple joins with their son´s class mate a Rock concert. Delisle is always very economic in using music in his films but when he does it creates often very strong moments of catharsis. They dance and for this moments they enjoy themselves. One almost can feel the heat as a comfortable contrast to the winter outside. Among the moving characters and the hard Rock rhythms it evokes also this certain tenderness Delisle´s towards his protagonists which was also evident in 2 Fois Une Femme from 2010. Delisle traces the smallest moments of hope for his desperate characters. Some of them become magical cinematic moments. If the characters rediscover their bodies they find back their souls.

When I discovered the first film by François Delisle, Ruth in 1994 during the World film Festival of Montreal, I was in a very dogmatic phase of appreciating mostly films which tends to minimalism. Ruth seemed to fit very good in this. Today and especially after his last three films, I am sure there is no formula which fits for Delisle´s work and even my mentions and comparisons between Chorus and Ozu´s film have its limits. Even though his last three films are interesting experiments with this mighty apparatus of film making like  his playfullness with narrative forms there is a very strong relationship between what his films reveal and finally how they approach it. Even more than his previous films, Chorus seems to be tight composed in almost each frame. But what these frames finally evoke especially about the film´s protagonists goes far beyond any formal experiment. To use again my favorite definition of the German word Einstellung (shot) by Wim Wenders: This German word includes not only the technical term of film making but also the attitude you have towards the things which are revealed it. Remember the opening sequence with the perpetrator confessing his murder to a police investigator. We see him first from the point of view of the investigator and after a cut we see the police officer from his perspective. The same scene is reveled much later in the film and this time as a video recording for  Iréne and Christophe after the murderer has committed suicide. The “spectators”  Iréne and Christophe are more affected like us at the film opening long before we learn anything about their tragedy. In this repetition of a scene we remember we have to deal with the mourning, loss and bitterness of the couple and at the same time with the miserable fate of the perpetrator at the same time.Just alone this idea reveals what I would like to call "cinematic intelligence.
The following breakdown of the couple turns the inner tremors to the surface of the physical world. This is almost like an explosion in this subtle and slow paced film, a moment when almost the mightyCinema Scope frame (an obvious tool of the cinematic apparatus) seems to tremble. That is what I mean with this relationship in Delisle´s films between the apparatus of image making and the naked truthfulness it disclosed. It is not only a film about the vulnerability of a mourning couple who has to deal with a big loss, the film itself – or better the cinematic point of view (lets use the German word Einstellung again) seems to be a precise interface between between what we see and how we see it. I know – there is much more to say about Chorus (which is for my side with 2 Fois Une Femme Delisle´s finest film). François Delisles films and especially his new film Chorus represent an art of empathy.