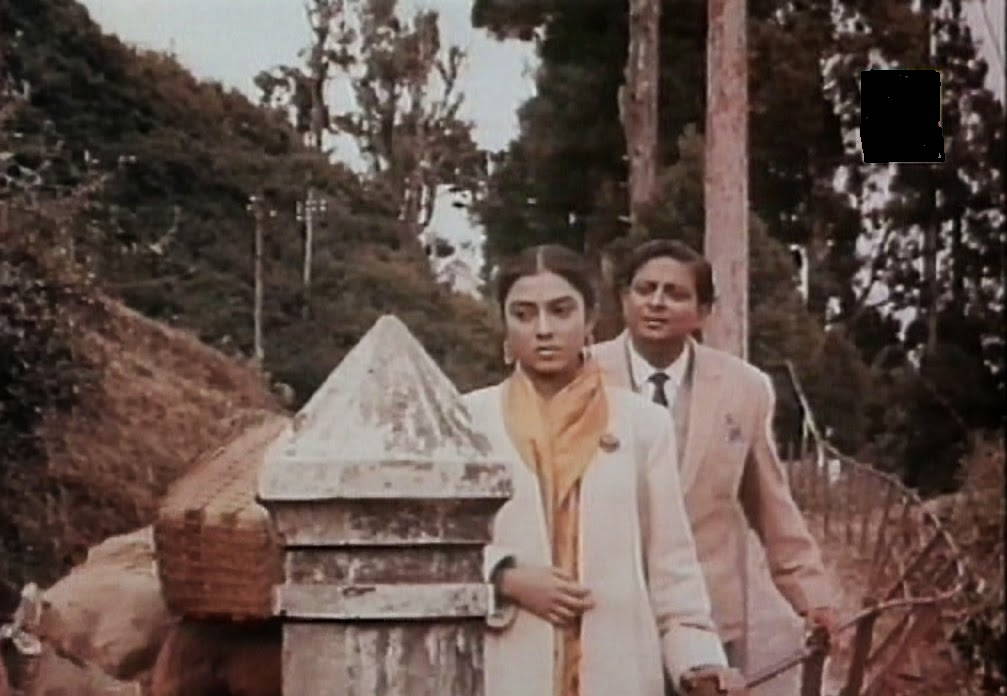 The film is about 100 minutes long and about as long as a walk of a family near the mountain Kanchenjungha The family spends here their last holiday. In the background we see always the mighty mountain landscape whose existence seems to be everlasting compared with the span of a human life. Paths delimited by walls and balustrades are leading through this landscape – and behind this demarcations one forebodes dizzying abyss. The free moving space of the people (who walk through this landscape are reduced on the limited space of man-made paths.

Kanchanjangha is a film about limitations. That concerns the limitation of the film´s length its frames and the very concrete and visible demarcations of the paths. One even does not dare to think about deviating from this demarcations because they are the border between the part of the landscape which is accessible for men and the dangerous and inaccessible part.

The father Indranath Roy represents the societal power, a big industrialist who even considers the planned arranged marriage of his barely 20 years old daughter as an important economical business. He is someone who knows how to establishes power if under the colonial rule of the British or under the rule of an independent India. The brother of Roy´s wife is only interested in the beauty of the birds and he has no interest in being involved in the intrigues of men and their power which makes him to a close relative of Manmohan Mitra in Rays last film Agantuk. The daughter Roy's, Manisha is supposed to subordinate all her wishes for the benefit of her father´s plans. They expect from her what Roy's wife and an elder daughter already did.


During this walk all characters will go through a transformation or they will find a new cognition about themselves.
The youngest son of this family flirts randomly with female tourists. During these excursions, the film jumps from one person to another or from one constellation of persons to the next. In one scene we see the daughter Manisha walking with the man which is chosen by her father as her prospective husband on these narrow paths. Later she meets Anil, a young man whose uncle once worked as a tutor family.
The eldest daughter tries during this walk to discuss the problems of her relationship with her husband while their child who finally will be the reason that the couple stays together) is riding a pony. They talk about divorce and finally find a compromise. The woman (an actress) tears the love letters of a lover and the husband promises to give up his guilty pleasures.
These characters who are close to a primal landscape which begins just right behind the road side are far away from their urbane home. It seems that for moments some of the characters are getting rid of the constraints of an urbane upper class culture.
Labanga , the mother has objections in the plan to marry her daughter with a stranger and as his wife she suffers most under the power of the patriarch Roy. In a very moving moment, she sits on a bank and sings a song by Tagore. The only person who listens to her is the brother who loves birds.

Anil, the young man who is looking for work rejects a job offered by Indranath Roy because he is disgusted by the arrogance of this rich man.Later he will admit to Manisha that he never had dared to reject such an offering in his home town Kolkata. But here in this wild landscape he felt enabled to do so.

The man who is chosen as the wedding candidate for Manisha separates himself from Manisha. During the walk with her he realized that she never will marry him by her own choice. They separate almost amicable. He just takes another path and he won´t appear anymore in this film.
Later the young woman will bid farewell to Anil and expresses her hope to see him again in Kolkata. The film ends where sympathies develop between the young people. Just the notion that both of them came closer to each other seems here almost like a Happy End.


Kanchanjangha is not a very long film and though it seems paradoxically like an eternity from which see just a few more than 100 minutes which seem to be visible just by accident.
In a strange way the contrast between the mighty mountain landscape and the people moving on strict demarcated ways appears nearly dramatic. There is the landscape in and beyond the demarcations of the paths and the inner world of the characters who act in conventions - and seldom beyond it.The landscape beyond human actions is always visible but it seems as something engrossed from human concepts
It has been told that the film was shot in 28 days but sometimes it evokes the illusion that it is shot just during a walk.
At the very end we see the patriarch Roy alone on a path. The day is going to end. He calls his family. Nobody answers. In this moment the old man seems to sense for the first time that his power is neither unlimited nor infinite. Now, he is not more than a mortal being surrounded by this mighty landscape.

Even though the persons, things and the landscape appear just as what they are, the whole film seems to be as engrossed like a dream And even though this film takes place on demarcated paths the landscape beyond of this mighty Kanchenjungha appears as a strange world of its own. Also present is the abyss just a few metres behind the paths. There is a remarkable moment when we see Manisha standing on one of this narrow roads. A horseman passes by. One is scared that he will hit Manisha. He passes by a hair. And at all – the characters move with an almost somnambulistic precision like the abyss beyond the man made paths are no risk for them.
Kanchanjangha is made during a period where Ray made one wonderful film after the other. The fact that this film remained relatively unknown and that it was mostly shown on retrospectives in the last decades is for me hard to believe. Among Ray admirers it is a kind of insider tip. If the film might be one of Rays most beautiful films (what I believe) or if it is one of Rays most daring experiments is of no consequence. My visions of Rays complete work has changed enduring since I have seen this film. I like to see the work of a filmmaker as a versatile and complex landscape. Some paths through this landscape are well known and proven, others are abandoned and forgotten but lead through a part of a landscape which a like an exciting discovery.

Rüdiger Tomczak
(translated from a German text in shomingeki No. 23, March 2011.) 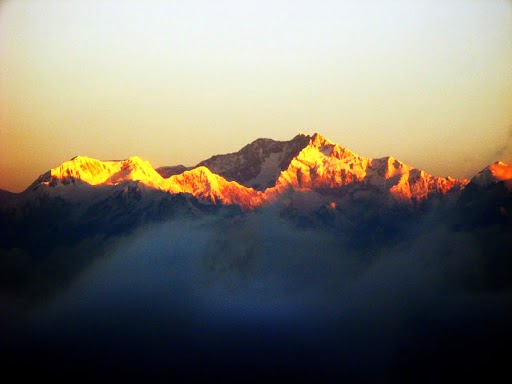 Posted by shomingeki at 11:44 AM No comments: