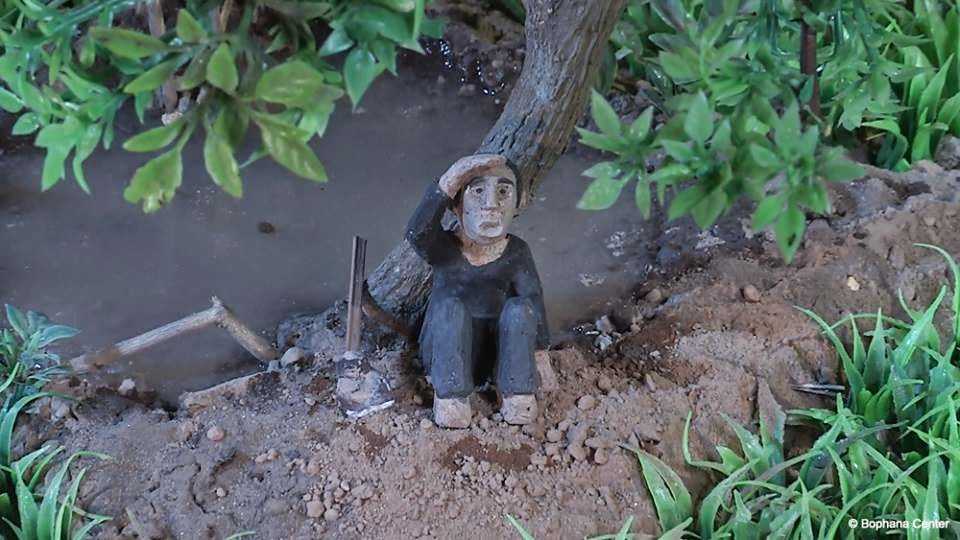 
20 years ago, I saw Rithy Panh´s first fiction film Neak Sre (The Rice Field, 1994) in a film theatre. This film about a family tragedy of Cambodian rice farmers ends with one of the most elegiac scenes I can remember from the cinema of the 90s, a final which you saw in this decade only in the films by Hou Hsiao Hsien: The mother in this film looses her mind after the dead of her husband. Long time held in a cage, the daughter frees her at the end of the film. In a an endless long and endless sad shot we see her walking into the depth of the image. When the light finally fades out for the black background of the credits, there is a simple dedication in French to Rithy Panh´s family.
This moment is burnt in my memory even though my knowledge of Cambodian history was few or how Rithy Panh was part of it, I could not know at that time. The emotional impact this moment had on me was a very complex one. One aspect was (just after learning a few and fragmentary details about Rithy Panh was the strong feeling that he might have lost his family during the terror regime of the Red Khmer.  The other aspect was that it reminds me in the famous ending scenes of some films by Hou Hsiao Hsien. I refer to these elagiac "farewells" from a cinematic world in which we have dived in deeply for 2 hours and which we finally have to leave.
20 years later, the last Good Friday I watched finally his most recent film L´Image Manquante. I was shocked how close I was with my strong feeling to the fate of his family. In the last 5 or 6 years, I am obsessed with explicit autobiographical inspired films if the fictional ones by Anjan Dutt, Ritwik Ghatak and Terrence Malick or the documentary essays by Yang Yonghi, Patricio Guzman, or Paramita Das. As Rithy Panh says in his new film “at the middle of my life, childhood comes back”, this , my obsession for these "songs about themselves" (Niles Schwartz) goes hand in hand with my own memories.

As I suggested in my most recent text on all these mentioned film maker, cinema is not always a showing, a presenting of images but often a sharing art how I should define a "personal film".
That does not mean that I betray my old idols with whom my knowledge and understanding of cinema grew over the years neither does it mean that I am less moved by a film by Ozu, Ford, Hou, Renoir or Yamada. But between me and these masters will always be their art, this magic performing of their art. If their films hit me too close, I still can escape in my admiration of their using this mighty apparatus of image making and even if they hit me too strong I can still sell my writing on them as my cultivation. The impact a film like L´Image Manquante by Rithy Panh has on me like the films by all those I mentioned before hit me direct, cut through my so-called cinephile cultivation like a knife through soft butter.
Influenced by the impact these films from Rithy Panh, Yang Yonghi, Terrence Malick or Ritwik Ghatak had on me I call it a paradox that these films are made with the same apparatus an Ozu, a Renoir or  Hitchcock made their films but this apparatus seems to vanish in front of my eyes.
I know that Rithy Panh reconstructs in L´Image Manquante his childhood before the Red Khmer and his time in the concentration camps and later the “Killing Fields” with the help of formed and painted clay puppets to give memories the matter which is obligatory for making it visible in cinema. That might be actually an artificial method to create an image which does not exist in any photographic or cinematic form but is hidden in the body and soul of Rithy Panh.

The official images made at this period in the history of Cambodia do not include the history of Rithy Panh and his family that died through famine and exhaustion. The millions of victims of this genocide became to the nameless skeletons and skulls. At least until now only a few photographic or cinematic documents are found like we know them for example about the german Holocaust.
In one short excerpt of a documentary made during the Red Khmer period aspects of the reality was revealed, worn out bodies of children, a single and short moment of truth about this new Cambodia. If filmed on purpose or if it was just a result of  being not cautious - we will never know. This cinematographer, tells Panh, was tortured and finally executed.

At the beginning we see a hand who begins to grave puppets out of clay and later we see a hand who paints them faces, hairs and clothes. One movement of this film is a re creation of lifetime which is lost, memories without any evidence like family photos. I have to open just a photo album to get an idea about the time I lived as a child, Rithy Panh, just the same age than my youngest brother has to work like an archaeologist or an anthropologist to visualize his early childhood for the public.

What moved me deepest is that L´Image Manquante founds images about an old and perverse phenomenon of injustice in history. The strange irrational feeling of shame of a child that feels guilty because he survived all his beloved ones and at the same time there are still people and mostly perpetrators who deny their infamous actions. A sad phenomenon which goes from victims of rape or child abuse until surviving victims of genocides. But the hidden truth of history, the truth about the nameless victims who suffered history lies in these millions of skeletons and skulls.

Sometimes the waves of the sea bluster aggressively towards the camera and our eyes. These are as well scaring moments like the sea will gulp us and with us the camera which collects evidence of human existence.

Like Patricio Guzman´s Nostalgia de la Luz, L´Image Manquante creates a dynamic relationship between being a historic document and at the same time a radical personal elegy. Like Guzman who escaped his certain execution by the Pinochet dictatorship only with a lot of luck, Panh as well escaped his certain death in the killing fields by a hair. Both films are not just made about victims of history but they are made obviously by victims of history.

The film reminds me in some moments in Art Spiegelman´s autobiographical graphic novel on the Holocaust Maus one of the most moving achievement to handle the Holocaust as a dark chapter in human history but as well as a personal drama.
Long after the film is finished I still see this strange clay puppets looking at me, the ones which embody the dying beloved ones of Rithy Panh and the one who embodies him as boy. The reconstructed memories of traces of a happy childhood and soon the memories of agony and death. These are moments when I don´t see anything else than memories of a disturbed and abused child. There are no words for that strange emotion caused by a film and caused by puppets of clay. It is probably Rithy Panh´s most personal film and in its fragility close to the three autobiographical films by Yang Yonghi.