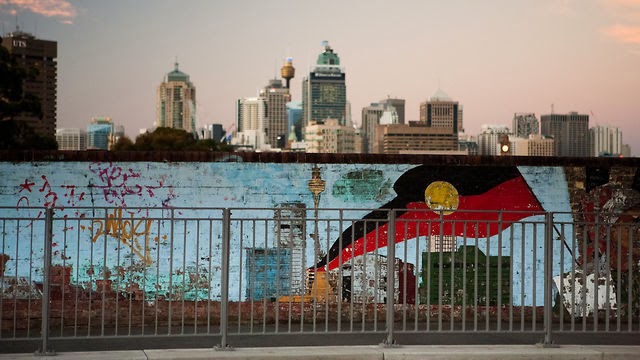 
First of all, Redfern is a photo film. If I am not mistaken – a short moment of floating clouds is the only part of the film with moving images.
The sound and the images are complementing each other but keep a kind of autonomy.
Trang Nguyen´s film is both, a formalistic work and at the same time an amazing precise portrait of a small community, a community of uprooted people in Redfern, a part of Sydney. Most of them are descends of Aborigines, those native Australians who are now a minority of around 2 percent of the whole population.
Even though the film tells about a community which is in danger to disappear, lost their language or got named by the British with false names, it is more a film about people who begin to reconstruct their history fragment by fragment.
The film arises from two seemingly opposites, images which does not allow at all the illusion of moving images and a soundtrack which moves through these collection of single images like a river.. What we will remember are faces of people, places in this quarter called Redfern and the stories of some people who went through drug addiction, alcoholism or other sufferings.
As the films seems to be a re-construction of a journey the filmmaker once made. It is also about a community which tries to reconstruct the history of the people´s culture including the personal stories of its members.
What the film in its strange beauty evokes in the dreams and hopes of these people comes from the people and things the film reveals itself. I feel a bit reminded in the pioneers of Cinema like the Lumiere brothers, sometimes in one of the central ideas of André Bazin (that the beauty unfolds in the things itself) but as well in the seismographic sensibility and tenderness in her view to the people like a Yasujiro Ozu. That Trang Nguyen seems at the first sight to take everything away from what we call Cinema – it has no other effect than finally offering us pure cinema.

Redfern, once an important industry region in Australia is now in a bad state, drug dealing, high unemployment and a high crime rate. The remains of industrial buildings witnesses the disgrace of landscapes and people. The uprooting of the aborigines once hired as cheap labors is part of it.
These uprooted people are now abandoned, lost. But Trang Nguyen´s Redfern tells also about how this uprooted and abandoned people begin to find back their place in the world.
In an environment of destruction, neglect and despair, the film shows people who resist in their vitality and in their hope and their dreams.
Trang Nguyen´s perception is without the smallest trace of sentimentality but she also never betrays the hopes and dreams of these people.
Actually Redfern consists of the film we see and the film which is evoked in our head. The soundtrack creates another space than these single photographs. Even though this film is as well a work of montage, the final editing will take place in our imagination.
I saw this film now three times and it becomes more beautiful with each watching. Call it another minimalistic approach if you like but I have doubts if it is the correct definition. Redfern has this strange beauty of abandoned industry landscapes where once abandoned there will be grow plants and flowers which were supposed to be lost. To recognize a sense of beauty in this disgraced landscapes, Trang Nguyen´s “minimalism” is nothing else than an instrument to focus on the essential. I can hardly believe that this film which evoked so much thoughts, ideas and feelings in me about the world, the people and last but not least cinema – is just 30 minutes long. I am looking forward to see her next films.

Posted by shomingeki at 5:56 PM