Notes on a 70mm-screening of 2001: A Space Odyssey in a very special film theatre called Grand Film Palast in Essen, Germany. 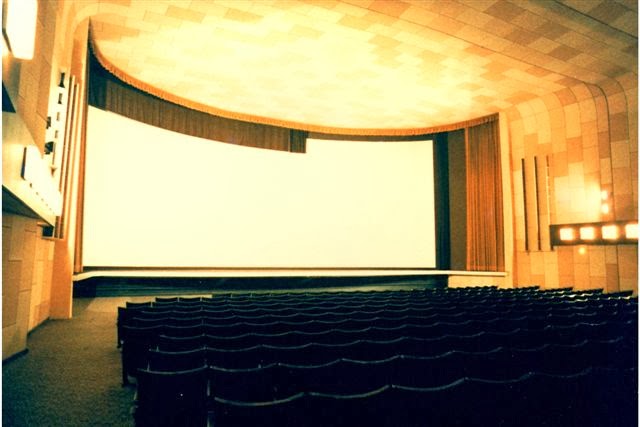 This cinema hall was easy to reach. Once you arrived at Essen main station, you cross the street and enter a shopping street. Walk straight and after ca 10 minutes turn left. You recognize the Grand Palast easily. You see the backside of the mighty big screen, an arched wall.

This film theatre is turned long time ago, I think that must have been the end of the 1980s, into a Varieté theatre. The Grand Film Palast was a relict from the last try of cinema to fight television. In Essen, the neighbor city of my hometown Bochum had even two big cinema halls with the capacity of projecting 70mm. The other one,  "Europa! which is as well closed since a long time has even a bigger screen than Grand Palast, but my dreams about cinema halls with big screens belong rather to this Grand Palast, not only it had the clearer sound.
Unforgettable was , I think it was May 1978, the screening of Stanley Kubrick´s 2001: A Space Odyssey in 70 mm. It was a re-release of this film which started like a commercial disaster and ended up as the greatest achievement the science fiction film ever had – until today.
I remember that even the advertising and trailers which took only a part of the big screen seemed to me already monumental.
Then the lights was dimmed, the heavy curtain slides open endless slow until the full screen size and we hear the “overture” of Kubrick´s film, György Ligeti, „Atmospheres“. After that the light went completely out and the film began, in a projection I never saw before and since, including the closing screening of this film at the Berlin Film festival 2001 which was also in 70 mm but projected on a screen much too small for this film.
I also have to say that the big inwards arched screen of the Grand Palast had a three dimensional effect on me, I never experienced again. The less spectacular scenes of this film, I could enjoy for the first time.
I have seen this film nearly 20 times, but it will always be connected with the two times I saw it in this special film theatre.
Well my passion for this film cooled off quite a bit in the last 30 years, but this film experience remained one of the greatest I ever had, because this film was projected in exactly the way it should be. Just a few years later, film theatres preferred projecting the cheaper 35mm versions of films originally recorded on 65mm matter and especially the prints of this film from the 1980s were horrible.

I have not visited this film theatre too often, what I regret today very much. Dounglas Trumbulls The Brainstorm Project (70 mm), The Right Stuff by Philip Kaufman (70mm) and also David Lynch´s Dune in 35mm Cinema scope and a few others. I can not believe I have missed Lawrence of Arabia which was screened there around 1984.

It is remarkable that a lot of these film theatres with big screens and with the ability of projecting 70mm have been closed, turned into something else or are even demolished like the other film theatre in Essen, Europe or two of three of the most beautiful film theatres in Berlin, Kosmos, Gloria (just a few year after its modernisation) and the Royal which had with its 400 square metres screen the biggest arched screen in the world.
What can be more symbolic that the re-release of 2001 in May 1978 was just a few months before the german release of the first Star Wars film. A film like star wars you can even see on your laptop and you can be sure there is no detail you miss, even its Cinema scope format is decoration, nothing more.

Of course the idea of the industry in using 70 mm on big screens was a cinema of overwhelming. The high costs of shooting and finally projecting in 70 mm made this format never to a real Standard in the industry. Even worse, a lot of films shot in 70 mm were hardly projected in this format – especially films with a lot of artistic ambitions like Masaki Kobayashi´s Kaidan, Akira Kurosawa´s Dersu Uzala, Jacques Tait´s Playtime, Terrence Malick´s Days of Heaven, Luchino Visconti´s Il Gattopardo and a lot more. 70 mm-film projection is now something for the film museums or special film festivals.

What was so special in that very evening in May 1978 was how the whole architecture and the technical advanced equipment of the cinema hall and Kubrick´s masterpiece came together.
70 mm was as the expectation of Kubrick´s investors first of all commercial interests. Kubrick used this investments in the most subversive kind one can imagine and like one critic wrote it is the „most expensive avantegarde film ever made“. The 70 mm projection of this film reveals the physical illusion of a space travel, the most – at least on the surface – attractive element of the film. At the same time Kubrick and all the possibilities of the technical apparatus, the high expensive 70mm format included reveals as well a disillusioned effect of space travels to come. A travel from earth to moon can be as boring as along distant flight (which were around 1968 by far not as much frequented like today). A 70 mm-projection of this film reveals both: the attraction of a space travel but as well its uncomfortable part, this confusion of the senses which conditioned for gravity and the awareness that a few kilometres above the earth men are lost without a lot of technical devices. Just to use a toilet in a space ship means you have to study a very long manual, one of the details you can really only realize on a big screen. Is there a more depressing moment in Cinema when one of the astronauts tries to repair an antenna, depending on his space suit? His breathing is one of the most disturbing sound effects ever used in this genre. And even though Kubrick had exactly 6 sound tracks, he sometimes works with moments of total silence.

I remember the famous star gate sequence which is as fascinating (in all its 70 mm glory) but as well very disturbing. It is relative uninteresting for me that 2001 is for a good reason praised as one of the finest technical achievements in the history of cinema and it does not matter much for me that until today the standards of special effects was set by this film. More interesting is how he has used the whole technical apparatus – including the awareness that this film will also be projected on screens between 200 and 400 square metres. He brings two elements together in Cinema which are often called to be opponents: the overwhelming and the reflective element.
In 1978 2001 was far away from being that iconic masterpiece as what it is known today. Just 10 years after its premiere t was still much more controversial discussed than today. The Grand Palast was well packed, considering that it was already a 10 years old film, a re release which would be impossible today, not to mention a re release in 70 mm.

What brought this film theatre back in my mind – and especially a screening of a film which was my favorite film until my early Twenties, which I still respect a lot but with much less passion than I used to feel for it?
Today most of contemporary and old films which mean a lot to me I see on festivals, in retrospectives – and the films which are available for me only on DVD or Blue ray like the films by Aparna Sen, Hou hsiao Hsien etc.The last three films by Terrence Malick which I saw in cinemas right at the time when they were released are exceptions. I had to hurry to see To The Wonder several times in a theatre, because it disappeared very soon. Even though my horizon changed a lot since the 1970s especially since the crush I had for 2001 and Barry Lyndon.
But there is the difference. I was not only lucky to see these films on the big screen, I had also no other choice. Video was not yet a mass medium. When I saw films like from one of my favorite contemporary filmmaker Aparna Sen which I probably will never see on a big screen as a theatrical release in my country I always try to imagine how this film would appear in a real film theatre.The same goes for Hou Hsiao Hsien, Dang Nhat Minh, Anjan Dutt, Yoji Yamada - and a lot more. Today I try to imagine these films in some of the film theatres which are only existing in my dreams now.
I do not want to complain on DVD or Blue ray I saw a lot of films in a better (often restored) version than in some film theatres and even more – I have access to much more films than before.
And I am sure in a not too far future one can build up his own home cinema in high quality in sound and image. But it will never be the same.

This screening of 2001, 1978 in one of the most beautiful film theatres I ever saw in my life was both , an amazing personal experience but I witnessed as well a part of film history. The film itself which turned from a very controversy discussed film into a cult film exactly in this 10 years after its premiere and the practice of 70 mm projections which was already disappearing in the 1970s in theatrical releases. The architecture of the Grand Palast which must be from the late 1950s to the early 1960s is as well disappearing. It was probably the first epoch in the history of film theatres when the industry set up high standards for sound and image technique, but strangely these kind of cinema halls died earlier than some theatres which already existed longer.
This very screening 2001 was at the right time and at the right place. In my memory 2001: A Space Odyssey and the Grand Palast in Essen was a happy marriage of a masterpiece of a film and a masterpiece of architecture. 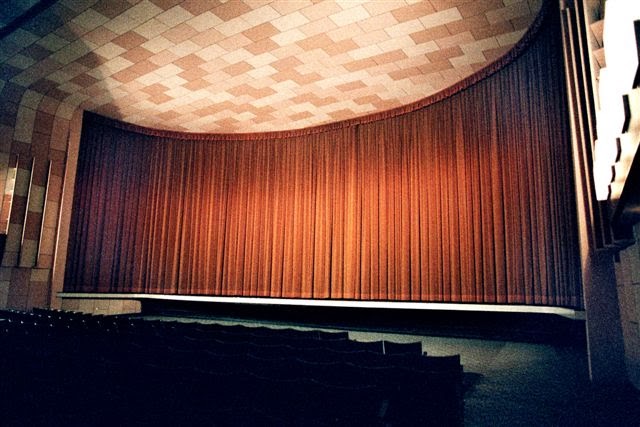