This text is a translation from a review, published in shomingeki No. 4, June 1997 with added comments.

The rice fields are shining greenish golden. Nham, a 17 years old boy works with others in a brickworks. We see how he works, how he sweats and how he moans because of this strain. After the work he lays down on the bricks which are ready to be burnt. The others, exhausted as well are gathering to relax. The money he earned for this hard work he passes to his sister in law. He walks home and the rice field is filling now the whole frame of the image. The film is especially about the planting and harvesting of the rice fields. The kind he picks up a rice spike and how he chews on it is referential. He is looking to the blue sky where a plane is flying.

Nhams father has died in the war. He is living with his mother, his little sister and his sister in law Ngu together. His brother (Ngu´s husband), moved away looking for work to earn his living. Form time to time Ngu receives a letter from him in which he informs her that his return will be postponed, a half hearted promise.
Nham loves poems and works with his family in the rice fields. There is an unspoken love between him and his sister in law. His over voice comments suggest that everything we see is already past. As a sensitive adolescent he resemble Harriet in Jean Renoir´s The River. He experiences in comical and sad episodes the life of this rural community. Seemingly banal episodes interfuse this subjective narration.
A Television  antenna is installed of the roof of one of the few houses with a TV. Children are mocking about a fashion parade broadcasted in Television. A pig walks through the kitchen. Villagers are talking about how life might be in the big cities. Seemingly banal events grow on the edges of the film´s story. It seems the point of view of the directors is like an excited child which is so absorbed by all these
neglibilities around Nham´s story.

Nham goes by bike to the station to pick up a niece of his neighbour. This niece has left Vietnam many years before. Sometimes the camera follows him close, another time his drive is observed from the distance. Once the point of view is absorbed by movement, the next time the cinematic space is shallowed and emphasizes the two dimensions of an image.

Quyen the homecoming niece returns to the village of her childhood. She wears sun glasses and differs so much from the people in this village like a foreigner. She tells that she has left the country to escape her husband. Later, she was in a refugee camp in Hong Kongwhere she married for a short time an American for leaving this camp. It is a clear hint to the tragedy of the Vietnamese Boat People who had to leave Vietnam. This village appears sometimes almost like an utopian place where the joys and sufferings of a whole country is gathering, a widow mourning about her husband who dies in the war, the Vietnamese who returned from a foreign country and who is dreaming from her childhood. It is about a return to the earth in a world of technical progress which intervades only in small signs. Quyen, the stranger is rediscovering her home village but at the same times as well her own alienation from her native home.

Last time I saw this film for the 32. time with my friend T. In Abries. I felt that in this nearly two hours I showed a big part of my life. My passion for this films which stayed with me for 16 years includes my love for the films by Ozu Ford and Renoir and – I just discovered it recently – it prepared myself for the wonders in the films by Terrence Malick. The same love for the sensual visible world like Renoir and Malick, the same kind how our point of view is absorbed by the things we see. And yes – long before I even knew the name of Terrence Malick, it was the first film where I sensed the “one big soul” all late masterpieces by Terrence Malick are telling about.

I was strangely moved in the kind how people are touching things or touching their hairs. The technique of the films seems to retrait itself in front of the things it reveals. Sometimes a glance rambles to a river where a boat is driving or where children are swimming. Another time we see plants moved by the wind. Images in European Cinema like that I only knew from another masterpiece by Jean Renoir: Une Partie de Campagne.
Even the identity of Nham the narrator seems to be absorbed in his encounters with the stories of others and especially in his own sensual experiences. In one scene he looks secretly at Quyen who is bathing in the the river. He takes her clothes and begin to smell them. When Quyen sees him, he is scared and disappears in the fields.

A ritual festival, dedicated to the ancestors with prayers and ritual dances. In the evening a wonderful puppet show will be performed with men who move the puppets from behind a curtain in a pond and who let the puppet dance on the water. We see the fascinated glances of children and adults. In these moments I do not think in the cultural context of this beautiful performance to a culture strange to me. I remember the first puppet show I have seen in my life.

There are two moments which are burnt into my memory, strong moments which remind me that the true meaning of the term eroticism always means the biggest respect in the creation. Ngu, the lonely sister in law hugs Nham in a moment of despair. He answers this hugging. The remain for a while hugging each other. Suddenly Ngu is scared by Nhams ejaculation and takes her arms from his body. We see Nham and how he is surprised feeling the sperm on his fingers.
In another scene Nham and his sister in law discovering on a field a nest with new born birds. Ngu pets them and touches their beaks with her tongue. She smiles and sings an old Vietnamese folk song and is absorbed by this encounter like a child. In Dang Nhat Minh´s film there is always a physical sensation for the caressing of living bodies.

One of the most remarkable aspect in this film is Nham´s gender role. He is grown up almost only among women (men appear only as dead and gone or an uncle who is considered as a failure), small girls, young women, old women. His sexual awakening, one of the central elements of each films in this sub genre “Coming of age-film is connected with this subtle violence who finally puts Nham in his gender role the civilisation dictates him. The military service which follows directly his adolescence is quite a very sharp nobservation for this very gentle film. Finally what distinguishes Nham from his sister in law from his mother and the beautiful Quyen seems to be less biological than a social code.


Drunken truck drivers cause the death of two little girls, among them Nham´s little sister. The death invades with sudden violence into the world of this sensitive boy. From now on the film will be a long and eternal sad farewell. In a vision, Quyen who is waiting at the railway station for her departure, sees a boat where the two dead girls are waving to her. She says goodbye to Nham. A long time he looks after the departing train. Home is for him something concrete a sensual sensation. For Queyen the exile Vietnamese with the sad smile it is nothing more than a lost dream.

Nham gets his draft into military service. Sitting on a truck he writes following sentences on a paper: My name is Nham. I am missing my village. But I will return none day. He throws the paper into the lands ape. In another shot we see the heavy wheels of the truck on a plastered street which separates him and his beloved earth. The paper he wrote, is floating through the air. Nham´s declaration of love to his native village is lost. We see Ngu on a rice field. With the clothes and her dress protected against sun and the sharp edges of the plants she is bent over doing the hard work on which the life of the whole village depends on. Suddenly the image freezes.

Thuong Nho Dong Que is a remarkable film. Except some very few artificial moments and a few shots I almost have forgotten its form. There is so much tenderness and attention to details that every approach of analysis must fail What I have seen and what I almost believed to have touched seems to me like a personal memory for which I have to find a form for myself.
The miracle of this film is that it evokes the longing to rediscover this world with all senses of my body.

And yes, this text is written before this film became an obsession for me. I saw it just a few time when I wrote this text. Even though I saw it 32 times, I am not yet finished with this film and I never will. It came back when I saw The Tree of Life by Terrence Malick. The film came back when I saw Robert Mulligan´s wonderful The Man in the Moon – and this film is a very close relative of Jean Renoir´s masterpiece The River.
It is one of these films which became a part of life and there is nothing I can do about. 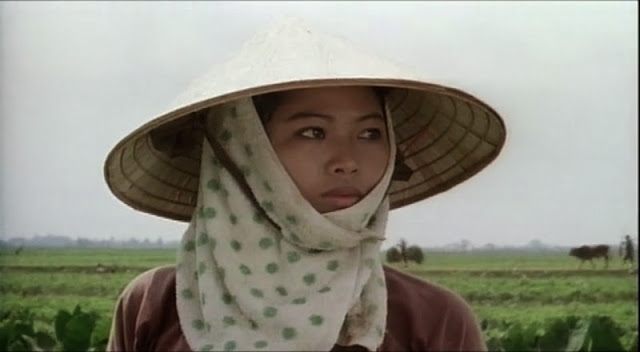