TRANSLATION OF LETTER TO VALÉRIE DHIVER about Boku no Ojisan by Yoichi Higashi, Japan: 2000, 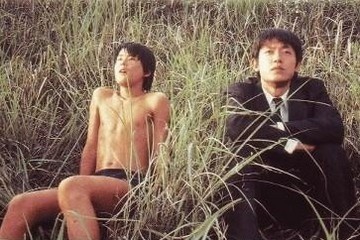 I have to thank you for an advice which let me enjoy one of the most beautiful film experiences I ever made during an edition of the Berlin Film festival: Village of Dreams, which came accidentally into the competition of 1996. It was for me a little paradise of cinema. But it was anything else than a simple idyll but it remind me in that what cinema is going to loose. Such films remain in the memory and they help us like we remember in hard times the joy and courage to live which is still existing in us and which is just waiting for being rediscovered. While Village of Dreams  is directly evoking memories in my childhood it has to do with the Madeleines in Proust´s “Research for the lost times”. The Crossing  is not only dealing about that, what the film is telling about. It does not deal only with the relationship between memories and facing the present in moments where we have doubts in the world but also with how are memories itself evoked.

The fact that I have seen The Crossing only once and even though I made  a lot of notes while seeing that film, my memories seem to be more like memories in a music piece. I remember the images of modern Tokyo. People are hurrying through streets which are flooded by neon light and we hear the well-known sounds of beeping handys. I am familiar with the anonymous crowd because I can find them just behind the exit of the cinema and at the placeless Potsdamer Platz. I remember camera movements, which have something like staggering and underrow from which it is hard to liberate for an individual. As familiar I am (even when I have to consider some japanese specifics)  with that  point of view, in this film it seems to be subtle accentuated into surreality. Higashi needs only a few shots for presenting all the madness and the alienation of the modern mega cities.

Koji is a young designer for advertising. In his profession still close to the picture book painters in Village of Dreams, his creativity is mistreated for the law of marketing. The twins in Village of Dreams fixed their childhood in wonderful picture books and this childhood was at the same time the source of their inspiration.  But Koji has to work hard to re-find this world in himself.
His situation looks bad. His boss is humiliating him, because his design is hard to sell. Than, his father dies and his brother´s son is recently released from the police with probation after his failed robbery. Kojis first memories (which are told in flashbacks) have nothing of sweetness, they rather correspondents with his recent crisis. Once he remembers a hard  by his father into his face. Another time in a short dream-sequence, he swims on the river in his home village and a kind of water spirit tries to take him to the ground. He wakes up and breathes hard like he would suffocating.
He feels insecure like his nephew Takuya, whose parents are divorced. In a later moment Koji sits on the bank of the river of his native village. He is realising the landscape around him which evokes memories in him like it can happen to us if we listen to music, seeing an image - or watching a film. Takuya is on one side a boy of the present, but in that what his presence is evoking in Koji he is also a “being of time” which is Proust's definition of what elements a human identity is consisting. Takuya and Koji in his boy age are played both by the actor Takihito Yosoyamada. Higashis film demonstrates that memories in film can be like that what Proust was describing. In one scene the adult Koji and the child Koji are sitting side by side at the river. In this image the memory of a man is becoming in the sense of the word a "being of a different time”.

Higashi loves music and before writing a script the listening of music (listened in consideration of the selection of the film music) is often an important inspiration. Recently he told me that he listens films like music and sees music like films. Even after the first seeing of Boku no ojisan I realised that Higashi is working with a lot of variations from motives, correspondences, images and music pieces, which we can only partial realise consciously but which give this film its hidden richness.  I got a vague idea what it means to think in images and sounds. There is for instant the motive of the mask: the mask of the young post robber, the one from a strange being from the world of Japanese mythology  (with what I am not familiar), or the mask in which Koji attacks his boss or scares his nephew, or the youth gang who attacked Koji and who carry likely masks. But there are also the invisible mask, that we carry for others and behind which we hide our real person. There are movements like the motive of the young Koji who swims through the river and the motorcycle rides of Takuya and the moments of looking into themselves, the contemplation of a landscape or of an image.
There is an image which beauty has to do as well with music, like with image and which may be a track like Higashi even conscious works with the two realities of realising present and memories which have for my side to do with the film reception itself: Koji and his girlfriend Rin, his brother and Takuya make an excursion to the village. In this frame, Koji is placed with his brother in the left part of the image. Takuya right before. Rin stands behind Takuya and smiles at him, like she would realise his presence as that of a “being of time”, what Koji was once. They are placed in a river landscape. In this moment she is the spectator, whose view is aimed almost from the other side of the screen, passing by Takuya directly sliding to the audience.

You know how less I appreciate the new Japanese cinema of the last decades. The Crossing  has something which the former greatest national cinematography mostly lost since almost 40 years. Most of the directors of the Thirties and Fifties offered through their wonderful films an image from the world but at the same time a vision about image making. That is not the last reason why I discovered in  Yoichi Higashi for me one of the few real important contemporary Japanese directors. For that I have to thank especially you. Every image, every cut and every music piece in The Crossing has for my side to do with that what I would like to call cinematographic intelligence.

PS: At first I was very angry about the fact that they ban The Crossing into the boring Panorama-section instead presenting it in the competition. But now I am rather wondering at all if the Berlin Film festival deserved a film like this.

Remarks:
This translation follows the German original which was written after seeing the film only once. It means it may includes some faults or misunderstandings which happen with memories.

1. The "Madeleines" are a kind of efrench eggc akes, which play an important role in Prousts novel.  "Madeleines" and milk coffee are evoking in the storyteller of Proust novel memories.
2. "Beings of Time" ist for my side one of the greatest film theoretical definitions in Prousts novel and ironically I remember this defination mostly while seeing asian films like from Higashi, Dang Nhat Minh, Hou Hsiao Hsien or Higashi. I understand this definition that even we are aging, moving directly from birth to death, our identity can be once of a person in their "right age" but in the next minute we  are at the same time a child of 10 years etc.  It can happen if we dream, or in the zone between sleeping and awakening. I understand Proust as well that our identity is a complicate combination of different "beings of time".  The scene with Koji sitting behind the the young boy he was in the same image and the fact that Koji in his boy age is played by the same actor who played Takuya seems to me a good example.
And off course this cinematic idea may be independent from Proust idea and this association is my own. But I still cosider Proust as one of the greatest film theorist generally.  The association Higashi/Proust has for me at first to do with my attitude that a good film is as well a good theoretical idea about cinema-which is off course transformed absolutely into cinematic poetic terms.

Posted by shomingeki at 3:36 PM