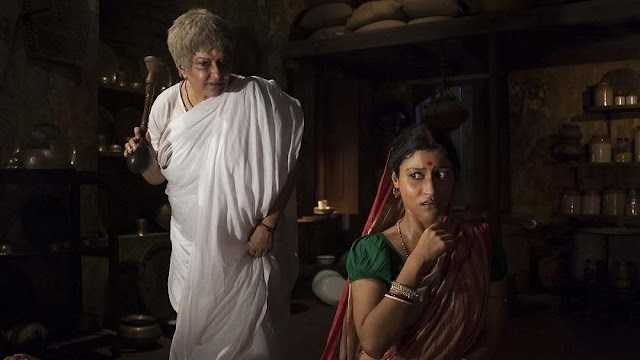 Three women, three periods in Bengal history and a jewelry box which is passed through these women and periods of history. The first woman,  Rashmoni was married as a child of 11 years and already widowed at the age of 12. Married into a house of landlords, she spends her life without joy except her collection of jewelry she brought as her dowry into this short marriage. When the young Somlata marries into the same family, they almost forget Rashmoni (called Pishima). When the widow passes away her ghost passes the jewel box to Somlata and warns her not to take anything from it and to hide it carefully. This jewelry box is a bit like the earrings of Madame de by Max Ophüls, a thing which is what it is but which also has different meanings for its owners. For Rashmoni/Pishima this collection of jewelry is the reward for an unhappy and lonely life, for Somlata it will be a help to build up a life for herself and her husband and finally for Somlatas daughter, it will be just old fashioned crap but good enough for supporting freedom fighter in the Independence war of the former East Bengal against Pakistan. After Somlata´s daughter sold the jewelry, the mother finds the empty box and instead of jewelry she finds love poems of a man who once loved her and whose love she once rejected.
Like most of Aparna Sen´s female character in her last 5 films, they are not completely able to take their life in their own hands, but they get an idea about this other life they are not able yet to live. Exceptions are Somlatas daughter and Rituparna Sen Guptas Paromita in Paromitar Ek Din (House of Memories. As the gender relations in Aparna Sen´s film became more and more differentiated at least since Yugant, but obviously since her male characters played by Rahul Bose and Koushik Sen (who has a small role as Somlata´s lover in Goynar Baksho), the universe of Aparna Sen´s film is now one of the most complex in contemporary narrative Cinema. Even in her flirts with genre elements, her 10 long feature films display a versatility, her re-inventing of the Road Movie in Mr. And Mrs. Iyer, the surrealism in 15 Park Avenue, the tragicomic elements in The Japanese Wife and her play with different time levels in Yugant, Paromitar Ek Din, The Japanese Wife and Iti Mrinalini.

Goynar Baksho is a ghost story, a comedy or better what the French call “comédy dramatique”, a balance between tragic and comic which, for example offers a new facet of actress Konkona Sen Sharma as Somlata. Like in The Japanese Wife, Moushumi Chatterjee as Rashmoni/Pishima is again the heart of the film. She again plays a widow (even though a ghost of her) with humor and sarcasm. Opposite to western definitions of ghosts or phantoms, Pishima is neither good nor bad, neither a creature from hell nor from heaven, but a creature who tries to continue her “existence” in another way. She is a ghost but still with an ability for human feelings, anger, pity or even able to feel moved when Somlata dedicates the name of her Sari shop to Rashmoni´s memory. No wonder that the interactions or shall I call it the “duets” between Konkona Sen Sharma and Moushumi Chatterjee have a Mozart-like magic and they can really vary from dead serious to comical, offering a kaleidoscope of human emotions.

Actually Goynar Baksho was supposed to be made by Aparna Sen in 1993 as her fourth film after this  very bleak Stroheim-like Satee. It would have been Aparna Sen´s first film with comical elements, elements which we find in her films not before Mr. And Mrs. Iyer.

The tricky thing with the films by Aparna Sen and especially her recent masterpieces from up to Mr. and Mrs. Iyer is that they might not attract everyone at the first sight. I know of what I am talking (even though I am very slow) and I still remember how disappointed I was when I saw Mr. And Mrs. Iyer the first time and how it became after I have seen it nearly 30 times one of the big journeys in my cinephile life. There are some keys hidden in her films. If you find some than you are lucky enough to have access into films where some some sudden flashes of pure cinematic intelligence can make you dizzy in amazement

I imagine a far future when most of the treasures of Cinema turned into dust, some people who still find a copy of a film like Goynar Baksho are still lucky enough to get an idea of the glory of Cinema.

For example Konkona Sen Sharma´s Somlata, at the beginning a nearly isolated desperate woman close to the women in the early films by Aparna Sen is locked into a house, almost prisoned among enemies.
Her first glance into the backyard, her first glance to the roof of the roof of the house where people enjoying watching rising kites. Her glance and the camera open new rooms for a woman in a male dominated feudal Hindu family. This is at the same time concrete, easy to understand but as well as abstract like a part of a musical composition. Just one glance by Sen Sharma paraphrased by a camera movement leads to a moment of pure Cinema.

Imagine the worst case if the soundtrack of the film will fail. You still see enough. Even though Konkona Sen Sharma´s stammering character Somlata is unforgettable (one of the few Indian female voices I recognize in seconds) it will proof that when sound never had been invented, she would also a great actress for silent Cinema like Ruang Ling Yu, Zasu Pitts or Mary Pickford. No wonder that Sen Sharma fits very well in Aparna Sen´s visual system of glances.

Even though Aparna Sen followed never trends or fashions in her directing career and even though she seemed to be uninfluenced by the Avantegarde which was since early Cinema one of the few niches for women filmmakers – I have to think in an old interview (what I did 1996) with Vietnamese-American experimental filmmaker Trinh. T. Minh-ha and her definition how to “create new ground”. When the female characters in Aparna Sen´s early films, were almost locked into themselves and into the space the society has destined for them, they begin gradually to break out, the middle aged woman in Paraoma, the artist in Yugant, a dancer who still has to defend her space against her husband. The first successful outbreak of a woman in Paromitar Ek Din (a kind of link between Aparna Sen´s early and her late films) and finally the most recent masterpiece in this sub genre called Road Movie, Mr. and Mrs. Iyer, a female protagonist can move for a while through a wide landscape like men in the films by John Ford. Without any intention to put her early films against her last films (Aparna Sen´s film are communicating with each other anyway), her films became broader in many ways and last but not least more playful.
If the ghost of the tragic aunt Rashmoni still reminds in Aparna Sen´s early films than it strikes me that she can move through the world almost without limits and not restricted by any gravitation.Not only with bitterness and grieve over her tragic life but also with humor and sometimes sarcasm, I imagine her as well as the revenge of the desperate early female characters in Aparna Sen´s films. At the end (even Rashmoni´s time as a ghost is limited) she disappears into the fog exactly like the film.

I know that is my own business when I feel through a film like Goynar Baksho, The Japanese Wife, Iti Mirinalini like travelling through 118 years of film history. Here I feel greeted by Ozu, Ford, Hitchcock and there I feel the elegance of Douglas Sirk or Max Ophüls, in her earlier films the cruelty of Stroheim etc. But one thing for sure – in the ghettoisation of contemporary Cinema, in the often stereotypical discussed conflict between mainstream and art, entertaining and avantegarde, Aparna Sen is like a fresh wind. A film like Goynar Baksho offers you the luxury to laugh, cry, to be entertained and the some seconds later to feel amazed by an Ozu-like cinematic intelligence.

Anjan Dutt whose film Dutta Vs Dutta, is another recent masterpiece from India, has written a beautiful little column on Goynar Baksho

My other texts on films by Aparna Sen

Posted by shomingeki at 5:09 PM