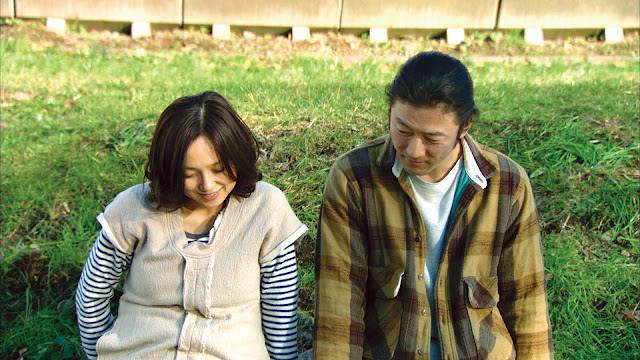 
The film is an adaption of an  autobiographical novel by war photographer Yutaka Kamoshida. Yoichi Higashi has a special talent to integrate documentary elements into a fiction film like the Chinese filmmaker Allen Fong. Higashi´s film reconstructs the story of the alcohol addicted war photographer Yutaka Kamoshida. He is already separated from his wife and his two children.He goes for a withdrawal treatment into a clinic. The exact translation of the film´s title “I come home when I am sober” is already a hint to the story. The film is not a tale of woe about a man who is mentally and physically finished. On the contrary – the film tells about the return to life of an almost destroyed man. Even though the end of the film gives a hint to the death of the protagonist (The real Kamoshida passed away at the age of 42 because of kidney cancer) the film is rather about a new begin than about dying.


The most shocking scenes we see near the beginning and these will be the only ones in that the main character is exposed to our gazes.Heavily drunken, Kamoshida wakes up at night (since his divorce he is living with his mother). He has wet his bed and walks heavily to the toilet where he has a hemoptysis. The following medical surgery is filmed with nearly documental precision. His wife and his children visit him at the hospital. Impressing like always in films by Higashi are here the children. They seem rather present than acting as fictive persons. This follows a special tradition of Japanese Cinema, especially the films by Hiroshi Shimizu.


The following conversations with doctors and nurses or the commitment into the psychiatric clinic emphasize for a moment the realistic aspect of the film. While we watch the wonderful actors Tadanobu Asano (Yutaka Kamoshida) and Hiromi Nagasaku (Rieko Kamoshida) working, there are often small breaks in this seemingly documental character of this film. Once , the drinker sees a ghost or a goblin who encourages him to drink. In a flashback, Kamoshida shouts at his wife (a cartoonist) , finally beats her, desolates her desk and tears her drawings. In one moment, Yutaka Kamoshida is changed himself into a dark demon.


More and more, Higashi adds elements which are related rather to picture books than to a documental reconstruction. There is for example a short moment with Rieko and her children. The background is totally black. It is almost a “Cinéma Pure”-element which rather belongs to picture books and comic strips. With that goes Higashi´s bedazzlement with his typical pointed use of film music. Higashi is one of the most inspired directors of our times in his unique use of film music. Some moments of this film remind me in one of his most beautiful films E no naka no boku no mura (Village of Dreams, 1995).


Like in the films of so much old masters of Cinema, we find both in the film: a somnambulistic certainty and a special playfulness which adds a freshness to the film. With certainty I mean a very special sensitiveness to show exactly as much as it is neccesary to evoke imagination instead of destroying it. There are only very few hints to Kamoshida´s traumatic experiences as a war photographer in Cambodia or to the alcohol disease of his father who also ruined his whole family.


At the beginning, Rieko tells her husband´s doctor about these experiences in Cambodia. The doctor answers her with another question: “Who suffers more, the people who see the hell or the ones who have to live in it?”


The film is not fixed on a simple explanation of Kamoshidas actions but he offers possibilities in form of small hints.


Only at the beginning of the withdrawal treatment there are some heavy outbreaks of emotions by Kamoshida. Bit mostly Asano embodies his Character with an adorable calmness. There is not really a story performed for us but we indwell for a limited time period the story or the stories the film is telling. The more it gets obvious that Kamoshida is going to die (the medics diagnose cureless kidney cancer) the more appear short but unforgettable shining moments of happiness. If there is a moment in the film which illustrates how Higashi is able to create out of ordinary every day events poetic moments than a scene close to Kamoshida´s release from the clinic. He is sitting at the shore of a small river nearby and dives with his feet into the water. A few moments later his wife joins him. We see their feet and how they wrest which each other in a playful way. They seem like careless children without any burden in this moment like the hell of their relationship where they went through, is forgotten. This reunion won t last long. This small moment resists against the inevitable fact of Kamoshida´s dying.


The family is united again. Rieko cuts onions and cries. She explains to the children “it is because of the onions”. But we hear a very sad song. In an earlier dialogue between Rieko and Kamoshida´s doctor, she tells a bout a hard to define feeling where she does not know if she is happy or sad.


Kamoshida is sitting on the couch. He wars a cap and we got a hint that he is already under the treatment of a chemo therapy. On a big monitor he watches underwater films.


At the end, the family makes an excursion to the sea. Kamoshida goes with the children to the beach, Rieko stays back watching him going away. The camera is moving over the dunes that we feel for a moment the rotation of the earth like in Ozu´s Bakushu or Renoir´s The River. Rieko looks again after Kamoshida whom the film let disappear through a jump cut. This is a presumption of his quick and final absence.


While we see the family at the beach, we hear a love song which is rather shouted than sung. That is like the film ends in front of the background of the sea where all life comes from.


Maybe we can read the film as a requiem for Yutaka Kamoshida – but one requiem where the sadness, the joy, the suffering and the hope is balanced. Yoi ga sametara, uchi ni kaero is a film which makes us happy and sad at the same time.

(translation from the original German text in shomingeki No. 24, August 2012. But this a corrected version, some mistakes are deleted.)

In my german blog there is also an old text and interview with Higashi-san on his masterpiece E no naka no boku no mura (Viilage of Dreams).

Posted by shomingeki at 4:49 PM