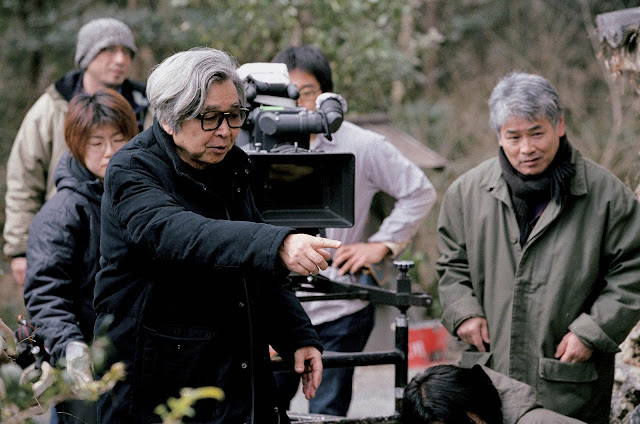 I was sceptic since I heard Yamada was supposed to make a remake of Ozu´s masterpiece Tokyo Monogatari. I was less worried about Ozu´s legendary film which will survive a dozen remakes if neccesary. I was more concerned about Yoji Yamada who is a master in his own right. Much closer to Kinoshita than to Ozu, among his more than 80 films there are a lot of masterpieces especially from the 1970s, 1990s and his last great film Kaabee is still in my mind. I am sure, Yamada must have at least a dozen of unfilmed screenplays on his desk written by himself. It remains a mystery to me -  why the hell a remake of Ozus film?

The film itself was the disappointment I expected. Could have been worse. Nearly unbearable are the sequences when the respect to Ozu´s original was too high. Than the film seems to be paralyzed.
The universes of Yasujiro Ozu and Yoji Yamada (for my side the greatest living japanese film director) are different. To move between both of them you need a wormhole. In a few moments you have the feeling you can connect these two different universes. One reason is the excellent music by Joe Hisaishi, a kind of Bernhard Herrman of contemporary Japanese Cinema. Hisaishi does n´t imitate the melodies of Ozu´s film, he re-interprets them with own little melodies.
Always when Yamada made changes in the original Ozu-plot, we get an idea what kind of film it could have been if Yamada had dealt more freely with this icon of the Japanese Cinema of the 1950s.
Yamada showed courage to replace Setsuko Hara´s daughter in law Noriko with a youngest son and his girlfriend also called Noriko. The youngest son is like the son in Yamada´s Musuko the underdog of the family, We know, Setsulo Hara´s Noriko was the heart of Ozu´s famous film from 1953. But Yamada found the perfect sollution in this change of the constellation. The film needed more of such radical changes of the original plot. Always when Yamada gives up the neary slavely respect of the original, the film offers both, this “wormhole” between the universes of Ozu and Yamada and even more, in such moments this very special Yamada-magic appears and enjoys for moments the freedom not to be compared with a film which is one of the most admired masterpiece of Japanese Cinema.

Yamada is like Frank Capra a master of the “comédie dramatique” and in contrast to Ozu, he is like Keisuke Kinoshita a master of Japanese melodrama. When Yamada´s temper in Tokyo Kazoku is a bit too much detained, probably out of respect for Ozu, the film got a strange emptiness and a static which has nothing to do with Ozu´s kind of framing.
It might have been forgotten, but Yamada already made a homage to Ozu 1991 with his masterpiece Musuko, a film which could have been called “Variation about a theme of Yasujiro Ozu” and last but not least a film which works as both, a homage to Ozu and a film by Yamada.
For avoiding misunderstandings – even though I have the reputation as a die hard admirer of Ozu, considering Tokyo Kazoku I am more concerned about Yamada, a director who enriched the Japanese Cinema after the decline of the Second Golden age with such wonderful films like Kazoku, Shiwase no kiroi no hankachi, Kokyo, Harakara and others. Just remember the year 2008 when the two old masters at the end of their Seventies Clint Eastwood and Yoji Yamada dominated with their films Gran Torino and Kaabee the whole year 2008. Kaabee was not just a good film, it was something like Yamada´s pendant to Kinoshita´s Nijushi no Hitomi (Twenty-four Eyes).
I love Yoji Yamada, even though in another kind like I adore Ozu. Mots of all I hope this exerted remake of Tokyo Monogatari will not be the last film by Yoji Yamada. It is not just that I consider this as a failed film by a great director - for me it is almost I saw a failure of a dear old friend and dammed - that makes me suffering.

other text on Yoji Yamada in this blog are here