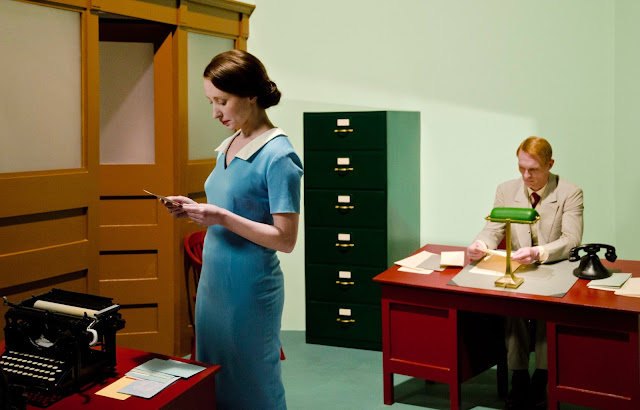 It is film in 13 scenes. Each scene is inspired by one famous painting of Edward Hopper. Shirley, the fictive actress moves through this scenes, she breathes, seems to be alive.
She will not age through the span of three decades. This 13 scenes frame as well American history from the 1930s to the 1960s.
Shirley is like us she jumps through the times without aging.
The film is about both, dwelling in and with 13 paintings by Edward Hopper but the film is as well thinking about Cinema and it uses the images of Hopper not just for a quotation but like a philosophy about images.

All 13 scenes are introduced by a title of a very concrete day in history and some fragments of broadcast news. These transitions remind me in Robert Mulligan´s Next Year, Same Place, another approach to think in images about history and Cinema. There is always the thin red line between global history and the history of a human life. And again I have to recall Adrian Martin´s extraordinary essay “Great Events and ordinary People”, this laudatio on Terrence Malick´s The Tree of Life on the FIPRESCI-site but which is also one of the most profound essay on Cinema in general I read for a very long time.

The sound itself seems to be painted. Sometimes background noise from streets, trains passing by, the sound of a curtain in a movie theater which we can hardly see.
But sometimes it is added music, a song, a piece which is not bound to the concrete time.

The reason I attended a screening of this film was Edward Hopper, but Gustav Deutsch offers much more than a cinematic interpretation of this wonderful painter who influenced and fascinated so much filmmaker. One of his paintings “New York Movie”, which I adore is a painting you don´t just watch, you feel like dwell in it for a while. The film does about the same. The stories, the film spins about Shirley, this woman who jumps through time have a strange effect. We can follow this stories or imagine our own. We can follow the over voice monologues of the film or our own unspoken silent thoughts. Shirley is a missing link between spectator and filmmaker.

There is another scene, inspired by another “Movie”-painting of Hopper: An almost empty film theater, we see Shirley from the side. The screen is almost hidden right outside the frame. We hear the soundtrack of a french film and we see her face. An intermission, the sound of the closing curtains. Shirley is captivated by the film but also by her own thoughts and feelings about her life which we hear as an over voice monologue. She is almost crying about the film or about her life, we don´t know exactly what is going on inside her mind but we get an idea about it – because we know this very special and hard to describe situation when we are alone in a film theater. But we feel there is a person aware of her time and her life but living in the frame of a very concrete and verifiable period of history.. It is an image of Shirley but today as well an image of a woman in a certain period of history in a movie theater, involved in her life and the film which are also specific elements of a past time.
The film gives her a name. I know it is a coincidence and not more than an accident that I watched at the same day this wonderful screening of the eldest Korean film which is in existence, Crossroads of Youth, combines with a performance of singer and narrator how it was screened in a Korean film theater of the 1930s. If I remember this, the most remarkable day of the Berlin Filmfestival 2013, I have to think of these image of Shirley and the nameless Korean audience which disappeared as identities in the darkness of forgotten history.
I am moved in a strange kind by Shirley like I am moved by the the forgotten Korean audience of the 1930s. Her individuality will turn into a ghost, but so will mine and this image Shirley alone in a movie theater means a human being alone alone watching a film, being captured in the things she sees on the screen and reflections on her own life will be as well the image which remains from all my passion for Cinema and all the way I connected it with my life.
In my mind this film brings together my admiration for Ozu and Malick at the same time. This image of the woman in a movie theater has at the same time the melancholy of an Ozu film but as well the incredible uncanny vision of the earth in the future burnt by the sun which turned into a Red Giant from Malick´s The Tree of Life.

Ozu once said he needed the limitations to be free and this wonderful film called Shirley – Visions of Reality which is structured in 13 limited frames, inspired by very specific paintings of Edward Hopper offers eternal freedom of inspiration. It is a homage to this great painter, it is a reflection about cinema but also a poetic essay about human individuals born into very specific (in this case American) history and last but not least a hymn to Cinema as the “art of seeing”.

(The painting by Hopper (Intermission) I am referring to in my text can be found here.)