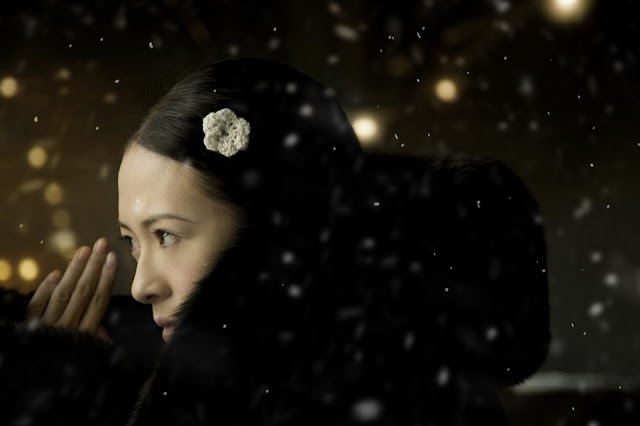 I was n´t a big admirer of Wong Kar Wei at all, but this disliking of his films goes back to a time where I for example neither knew the name Terrence Malick nor did I care just to try watching his films. So, a lot of things like preferences has changed in me. That I was once a quite a dogmatic person at that time is excusable, the fact that I felt smart and good with it is quite embarrassing for me.

To have watch some months ago one of Wong Kar Wei´s most famous films In The Mood for Love (2000) was a good thing to do for verifying my opinion about this director.
Just the first moments of his martial arts film Yi Dai Zong Shi were quite revealing and I know where my mistake lies. His stylized camera movements, I used to find manipulating more than 12 years ago. But indeed as I saw his most recent film. I realized I was wrong. As dreamlike his films are, as aware they make us about the gigantic machine who produces these dreamlike visions.
The first fighting scenes at the beginning in the middle of a rain fall, something strange happens: a  movement between the cinematic illusion and the strange awareness of exactly this illusion. The dominating rain is almost physical tangible but it also conceals some details of this fighting scene.

Ip Man, the almost invincible Kung Fu-master has a female equivalent called Gong Er, the only one against he lost a fight. Strangely and it might be a hint to understand martial films arts as a film genre, it is the speed of this fighting technique which overpowers the rival like we are overpowered by the cinematic illusion of the modern cinematic machine which we can track down to the first Laterna Magica and even further back to Ten thousands of years old paintings in prehistoric caves.

Sometimes I feel a bit that Wong Kar Wei´s film is forced to its length of only 120 minutes which seems too short for its narrative complexity.
But in general, I felt comfortable with this film. I know there was a time when I was never getting tired of preaching about Wong Kar Wei as a false prophet of modern cinema. This time I can´t even help feeling Nostalgia for his films which I used to condemn long time before.

In some moments of this film, I feel reminded in Max Ophüls´s only film in shot Cinemascope Lola Montez where Ophüls used the frame very flexible, sometimes only a small part of this frame is visible, others not and then the frame uses again the whole extreme format.

Even though like most of the Berlinale screenings, Yi Dai Zong Shi was as well a digital projection -  Ironically this film seems to be as fragile, like the old analog film matter.
The rain at the first scene for example is at the same time illusional but at the same time abstract and with a bit of imagination it looks like  scene from an old film bad preserved and dammed to its chemical decay.
As it is a film about changes and losses and last but not least also a love which never will be fulfilled, the film in its material appearance as light and sound seem mortal and it seems it can disappear at any moment.
Its a film which evokes in me the strange desire to see it again in a 35 mm- print.
If not unconditionally enthusiasm – but I begin to feel constantly respect for the work of Wong Kar Wei.