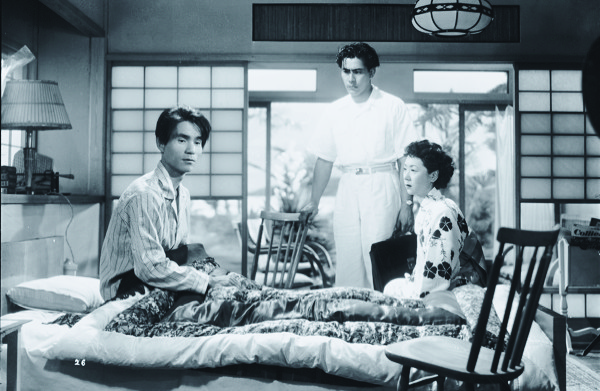 If I am not wrong than it is exactly the 11th. time that the International Forum that introduced one of the masters of Japanese Cinema and most of them from the two Golden Ages of the 1930s and 1950s like Ozu, Shimizu, Shimazu, Shibuya for example. This year they highlighted one of the most famous and also one of the most popular master Keisuke Kinoshita with 5 films (before and after the festival, this retrospective will be extended). Most if not all retrospectives since 2004 have wandered from the wonderful small festival TokyoFilmex (Japan) directly to Berlin and I don´t expect that the source of this great film country will be exhausted soon.

It is a film about a very fragile relationship between a small gangster and a revue girl in early Post war Japan. Most of the time the film takes place in open landscapes interwoven with closeups, nothing less than an experimental film about the outer world and the inner universes of the characters. They walk on steep slopes, dizzy coasts. The woman´s try to get away from this man and her dangerous relationship with him has its pendant in our fear of steep slopes and to get away from a dizziness which is nearly physical tangible. Images in dangerous tilt make this inner and outer landscapes even more scaring. When they walk on these slopes, the images become sometimes flat emphasizing the two dimensions of the cinematic image and Kinoshita´s film turns in such moments into a weird and heavy dream. The camera perspectives, the landscapes the camera reveals and the interplay between the geographic landscape and the landscape of these human faces reveal a bad relationship planted in a bad time which results from the disastrous war. Onna is a darker variable of such impressing landscapes-films like Hiroshi Shimizu´s Arigato-san or Satyajit Ray´s Kanchenjangha.

A kind of triangular relationship like in one of the greatest Chinese films Xiao cheng zhi chun (Spring in a small Town, 1948) by Fei Mu. The doctor (Toshiro Mifune in one of his finest roles) takes over the treatment of a sick man. His wife owns a jewely´s shop in Tokyo and falls for the young doctor who answers her feelings. It is a love that will never be fulfilled, only in small moments of happiness, excursions or common railway travels between Tokyo and the house where the sick husband lives. And like in Fei Mu´s masterpiece, Kinoshita cares equally for the emotions, longings, of the woman, the doctor but as well for the fear and despair of the sick husband with a tenderness which left me breathless. The shots, changes between long shots and close ups happen with a somnanbulistic certitude which is beyond any description. Like the wife and the doctor are divided in their longings and compassion and pity for the sick husband, the film itself has a balance between the feelings of the three characters, even if these feelings are in conflict with each other or sometimes even clashing with each other. The commonplace this praise of Japanese Cinema for its awareness of cinematic forms is as simple as it is for the right reason. The German word for shot “Einstellung” (how Wenders defined it once in an interview) is one key for the extreme sophistication of this film by Keisuke Kinoshita. The film is not just a story about three lovers, the film is the three lovers itself and we are part of it.

The Japanese masters of Cinema, they can tell you a story like in this film – a story of a family of poor fish mongers. They can tell you a story about a sick father, an egoistic pragmatic daughter, a mother and a boy who is dreaming to escape this poverty. The film begins with a flashback and from the beginning it is clear that this escape,this dream of the boy will fail. The only thing which helps him to escape the tristesse of his life is his use of the binoculars he got from his uncle. Through the binoculars he sees a world in which he never will live and he sees a girl for whom he falls and whom he never will approach.
And just like that – in the middle of an every day story which takes place in post war Japan, Kinoshita inserts one of the most accurate and most poetic vision about Cinema I ever experienced in a film. The film is not only about an ordinary family it is also made for these families whose life allows only to dream in a film theater. The deep melancholy in Kinoshita´s film is not to be confused with what we call in the west fatalism. In all its accuracy how the fragment of the world is shown the dreams of the characters are never betrayed. Kinoshita can show an every day tristesse with an accuracy which is probably a pure phenomenon of the Japanese Cinema and at the same time there is such a deep respect in your dreams which is unbelievable. Poetic realism if this term were n´t already given away to the French prewar Cinema, it would be an excellent description for the Japanese shomingeki-films and especially for the work of Keisuke Kinoshita.
In film history, Japanese Cinema is an endless source of cinematic wisdom and for Cinema an equivalent for the lost library of Alexandria and the Forum´s rediscovery of Keisuke Kinoshita was one of the great moments this year.

The retrospective will be continued at the Arsenal, Potsdamer Strasse 4

Posted by shomingeki at 1:40 PM