Notes on Kya Hya is Shahar ko? (What happened to this city), by Deepa Dhanraj, India: 1986-Berlin Filmfestival 2013 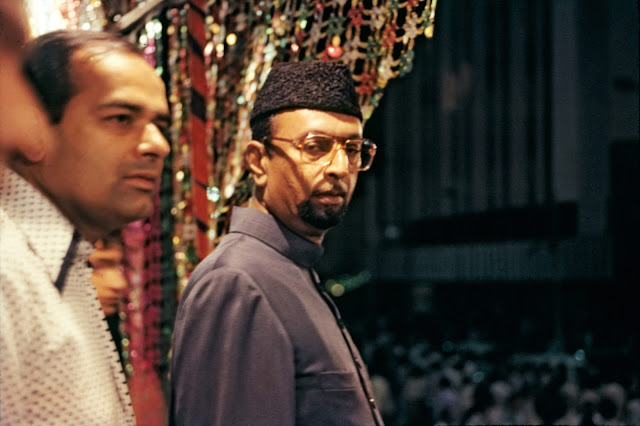 The Living Archive-Project of the Arsenal – Institute for Film and media art is a collaboration between filmmakers, curators or film historians around the globe. This institute, the former “Freunde der Deutschen Kinemathek” the initiators of the International Forum of Young Cinema, own a big film archive not only consisting of a lot films screened at the International Forum sections for more than 40 years. It was from the beginning the idea to make films shown at the Berlin Film festival available after the festival, especially for films which have no chance to get a properly distribution.

Kya Hya is Shahar ko?, a documentary by Deepa Dhanraj from 1986 is a film which was nearly lost, the original negative is already damaged and can be used only partly for restoration. So they tried a restoration with the poorly preserved negative and the film print owned by the Arsenal. As this restoration is going on the digital print is still on the limit of being watchable.

As the clashes between Muslims and Hindus a kind of communal riots dramatically raised after the partition of India -they are still today a big problem in the Indian sub continent, this film was introduced as an "exemplary political documentary from India". As it is hard for me  if not impossible for the moment to verify this reputation because I lack the knowledge of other documentaries from this time, the film benefits for my side mostly from its character as a document and less from being a documentary film.
That happens sometimes: you see very old films just saved from its decay and you can appreciate it with a certain historian interest but you won´t be able to appreciate it as a film - or at least you are unable to find the key for appreciating it as precious cinematic landmark.
There is a lot of blood shown in the film and there are a lot of women, men and children from Muslim and Hindu families who are mourning about family members killed in one of these riots between the two dominating religious groups in India. That these riots are always provoked for special political interests is well known, at least since the tragic partition of India. But to translate this dimension of suffering into images and sound is quite a delicate thing and difficult to realize. The film has sometimes such moments. Just at the beginning we see a Muslim woman who escaped with her children at a Hindu neighbor´s house who offered her shelter. But most parts of the film have for me the look of a provisional editing harder to adopt than the provisional preservation.
Maybe it is a certain kind of didactic which always disturb me in documentary films. If there is a certain kind of poetry in this film or even something special than I have to admit I missed it.

Among the few documentaries from India if not political like Shaan Khattau´s impressing Bhopal film The Dark I must not name (2000)or explicit political like in two very moving films by Bengali Anamika Bandopadhyay Red (2008) and 1700 Kelvin i(2012) n their efforts to understand documentary film as well as a cinematic form, I come rather to the conclusion that Indian documentaries made by women filmmaker have made almost a quantum leap forward compared to 1986.

Finally this special screening revealed a central problem of Indian Cinema, the embarrassing  carelessness of Indian producers, archives and unfortunately sometimes even filmmakers for their cinematic heritage. That it concerns a lot of films , from art cinema to documentaries which are not older than 30 years is an alarming condition.And yes the weak presence of India which is still one of the most interesting film countries in the world is a big problem and with big nostalgia I remember the time when the Gregors explored the cinematic diversity of this complex cultural landscape. But that is another story....