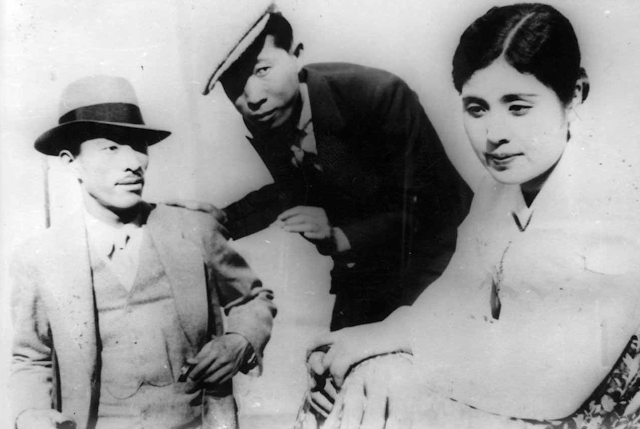 This is the eldest silent film from Korea which has survived and unfortunately the only film at all by Ahn Jong-hwa.
The try to explore he early history of Asian Cinema is full of obstacles. Even what we know about the early history of Japanese and Chinese Cinema is fragmentary, but what is left to us from the silent film period of Korean Cinema is even less. War, occupation, civil war and after that a carelessness about the cinematic heritage has left only a few fragments and just an idea how Korean Cinema in the 1930s would look like. This special screening of Cheungchun-eui sipjaro is again one of the filmhistoric highlights in the history of this film festival and like so often thanks to the International Forum. Last year we got an idea about Cambodian Cinema which is nearly wiped out through the terror regime of the Red Khmer.
During the screening, I had a likely feeling like last year. It was not this beautiful melodrama alone which moved me. The film is part of a performance with live music, singer and a “pyeonsa” the Korean pendant to the Japanese Benshi (a narrator) staged by contemporary director Kim Tae-yong.

Before the film began, a woman and a man sang in Korean. Before I even entered the Delphi theatre, a Korean pronounced the screening. The whole event was a staged journey into Korean cinema culture of the 1930s.
As an European but familiar with old Asian films, after a short while of acclimatisation with the silent film traditions like narrator and singer, I was blown away. It was an extreme experience. When I imagined for a moment sitting in a Korean film theater there was always the awakening, the awareness what I see is a relict from a lost world. The people who have seen this film at its premiere have probably all gone. I had, I remember a likely feeling with the Cambodian films last year.
For a moment this whole performance combined with the screening of a cinematic rarity made me thinking of all the personal feelings, the laughter and the tears of these people who are now anonymous.
The decay of most of these silent films from Korea or better my knowledge about the loss of them makes this experience even more precious to me.

The film itself - a melodrama of a young village man who goes to the big city and who has to protect his love and his sister against a sleazy man -  is full of stunning visual ideas and as fragmentary the early Korean film history exists in film prints, there remains a sadness in me that we probably never will learn much more about this national cinematic period. This period is not even 80 years old and in a strange way film seems as mortal than a human life.
I know some purists would like to go on my throat, but I never liked silent films without music, because they were never screened without it in the period of silent cinema. And the whole performance which is last but not least a reconstruction of the silent film tradition in Korea is both, a film historian scientific device to give an idea about a piece of lost cinema culture and at the same time it is poetic. Two stories are told here at the same time, the one the film is performing and the other, the imagined story on an unknown day in a film theater in Korea which is forgotten now, probably deconstructed and forgotten for ever. Kim Tae-Yong´s staging is like a time machine. For me it seems more than an exotic attraction and I rather think he does for a nearly forgotten period of Cinema a work like so much photographer do in transforming datas from space  telescopes into images which makes worlds which are already gone visible
In the case of this special event which deserves its term for more than one reason, I got a glimpse not only about a lost chapter of Cinema, but also that this special period of national Cinema that was once lived by men.

I don´t know if I will be able to describe my feelings after I left the film theater today, dismissed back in my reality like an awakening after a dream. We can try analyze or try to categorize this film. We can try to put in in a historian context, the Korean or the east Asian at that time. We can make researches about the traditions of Korean melodramas of that period. But what really moved me to tears was: I felt ghosts around me, the ghost of the people who made such a film but as well the ghosts of the Koreans who watched this films in full packed theaters like the Delphi today.
I was unable to see any other film today and feel as melancholic as the protagonist in John Huston´s Joyce-adaption The Dead.