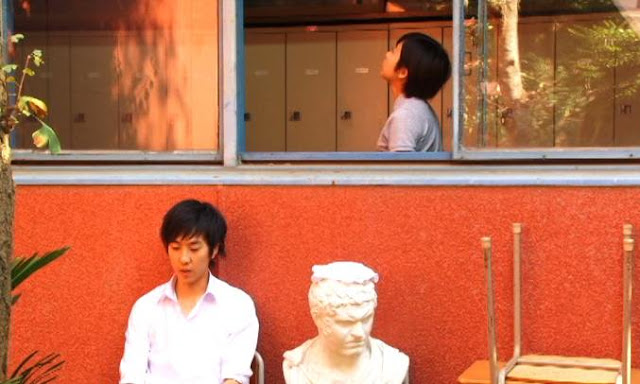 You can call it a kind of Coming of Age film. A boy (Tomohiko) and two girls (Machi and Hotaru) are high school students. First of all we see them walking around the strange deserted school, sitting in empty classrooms or swimming in an empty pool just for them alone. It is also a kind of triangle relationship between three adolescents. Nothing happens and there is not yet something like a plot. But the colours are emphasized, mostly warm red tones. There is rather an option of a story than a story itself. The focusing on moments in which is the option to form a story out of it, but rather as an offering. You can accept this offering but you don´t have to. It is a film where your eyes can move freely through.

These two girls and this boy are already playing and experimenting  with the gender roles they are supposed to adopt. They are confused. They don´t know really where to go with this. And it is the same with the film, which is a try or in better words - an approach to define itself as a film. A film is often a journey and in this case literally.

While these three teenagers are trying to approach the world, Machi is looking for her brother who disappeared 6 years ago. The Coming of Age film is now as well a kind of Road Movie. They meet the brother´s friend, who seems ti be a transsexual person. This is not more than a hint why Machi´s brother left home. He appears only once , in a dream of Machi. We can further suppose that the girl is looking for a certain established image of her brother rather than for the brother himself.

This film has also a soundtrack which is strangely restrained and which is also an equivalent of the journey of the tree young people through a nearly deserted world.
It is not that the film does n´t come to the point – it is rather that the film refuses even to focus this point. There remains always an analogy between how the film moves from moment to moment and the search of these three teenagers.
An unfinished film like an unfinished search.
But how absurd it seems, in its lack of smartness lies as well a big piece of wisdom.
Keiko Tsuruoka remains with her characters. Her film moves as hesitant like these young people. We are close to a time when we tried to experience the world before the violence of predetermination.
A subtle experimental film. A shy but at the same time a very courageous and daring first long feature.
The film won my heart, my sympathy.