Notes on The Man in the Moon by Robert Mulligan, USA: 1991 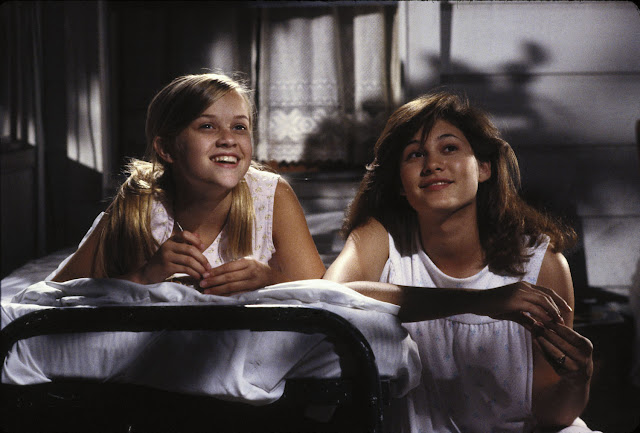 Some films come like a surprise, unexpected – and it is sometimes like love at the first sight.
Mulligan´s The Man in the Moon is the last film of this director. Even though I loved already his most famous film To Kill a Mockingbird, I was nearly ignorant about his films except there as a small and beautiful text by Peter Nau on The Nickel Ride in the last print issue of my magazine.

The Man in the Moon is a Coming of Age-film about two girls in Louisiana in 1957. The house they live in reminds me in its greenish color in the house in Jean Renoir´s masterpiece The River, a house and its garden limited by a fence. Behind the fence there is a pond where the 14 years old Dani likes to bath. Sometimes she is running this way through the bushes, followed by this long and elegant camera movements which are so typical in this film.
The film begins with the moon, imitating its orbit around the earth while we listening one of Dani´s favorite Elvis-song. It is an overture.
The first scene is a camera movement towards the house Dani and her elder sister Maureen are living in. Through the trees and the yard closer and closer to the house and the bedroom of the two girls, literally from the global to the private sphere of a family.
The song of Maureen and Dani can begin. In its lyrical quality, The Man in the Moon seems to be a very close relative of The River and Dang Nhat Minh´s Thuong Nho Dong Que (Nostalgia For the Countryside) but in its permanent movement between the global and the personal life of this family it leads also to Terrence Malick´s The Tree of Life.
Robert Mulligan´s film is also a work which is in touch with life, the up and downs of adolescent girls, the every day life of a family, the boring Sunday school on Sundays, the few entertainments the country side can offer for young people. It is also about the hard work for surviving. The plot is nearly invisible, we are captivated by the wonderful moments this film is filled with. For an American film of the 1990s, it seems rather exotic to me. Just let´s put aside for a second my references to Renoir´s film which was made 40 years before this one Mulligan´s almost prophetic hint to the film by Malick, made 20 years later – then I have to think in the extremely long camera movements of the films by the forgotten Japanese master Hiroshi Shimizu (another great director in capturing young adolescents). The drams of ordinary country girls, first love and all the elements of this sub genre called “Coming of Age”, Mulligan becomes at the same time an American Renoir, an American Ozu or Shimizu and finally an American Dang Nhat Minh – and last but not least – I can also see a prophecy of the enlightenment the mentioned film by Terrence Malick will give to world cinema.

While we are captured in this wonderful moment the death penetrate abrupt and surprising. The world Maureen and Dani are living in won´t be the same anymore. As young as these girls are, this youthful poem of a film gets the touch of grieve and aging.
The Man in the Moon is a simple yet very wise film. It ends like The River (this wonderful short simulation of the movement of the earth). In Mulligan´s film the camera closes with a movement back from the house. The window of Maureen´s and Dani´s bed room disappears between branches of a tree and the light of a full moon. The film takes a long and melancholy farewell of these persons who were so close to us for a few more than 90 minutes.
Like the sculptures of the gods and goddesses in The River become again clay in the ground of the River like our earth will become burnt ashes in The Tree of Life – it is like we are chased out of a paradise called Cinema.All the films which came to my mind when I saw The Man in the Moon have in common their Sufi-like poetry, this celebrating of life with all the senses we got.

Good, there are times when I am asking myself why so much fuss about Cinema all these years. And that is sometimes answered with an unexpected gift as an answer.
Robert Mulligan´s simple and great film is not a film you just watch. You have to live it with all the fibers of your body and all your soul or you remain just blind and dense.


PS: Maybe I should explain a bit more my definition of Paradise concerning this film and cinema in general. Especially in the so-called "Coming of Age"-films. In The River and The Man in the Moon there adolescent girls or in Thuong Nho Dong Que and The Tree of Life adolescent boys. This specific aga when kids are usually pushed into a certain gender identification - or in other words pushed into the dictatorship of the stupidness of predetermined men made roles, this films by Mulligan, Malick, Renoir or Dang set us back in a certain doubt we had once. The miracle of these films is last but not least that they take for a while the burden of this stupid conditioned gender identity from us - and especially from our point of view.

Posted by shomingeki at 2:18 PM