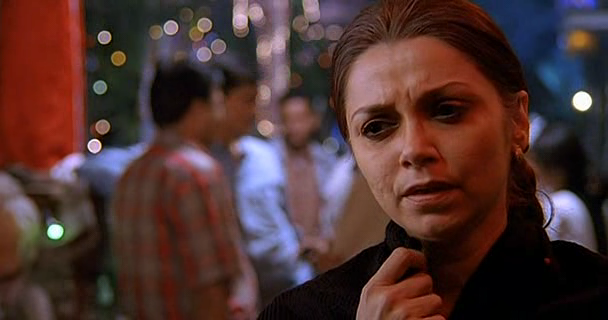 "It looks bad.
We have to hurry if we we still want to see something.
Everything disappears."
Paul Cézanne

My impression of Kolkata is like a collection of microcosms which stand beside each other, sometimes a change to "another world" begins in Kolkata in the next street. Anjan Dutt´s film takes place in a small quarter called “Bow Barracks”, once a caserne for American soldiers during World war II is now a residence for Anglo-Indians. Like it happened and still happens in all big cities – speculators are looking for grounds on which shopping malls and a lot more nonsense can be built. The historic value of this place or the Bow Barracks as an cultural heritage means nothing for this adventurers on the search for quick earned money.

At the beginning the first people move already out. The people who are still staying are split in a group who wants to go to Australia or England and the ones who insist on staying “with their property”.
The buildings carry signs of decay. Corridors look like infected by greenish mold. But one building is painted in a shining red, like it is resisting the decay and and the rapidly changing world. The human pendant to this building is Peter called “the cheater”, a living memory of the history of this building. He is also something like a "Conférencier" and almost the hub where all these different individual life stories are congregated. These different individual stories are composed to a network of different human lives.
The film tells rather a collection of stories which happen isochronic and which overlay each other.
There is Tom, the smuggler who is always beating his young wife Anne. Bradley one of the two sons of Emily loves her. His elder brother lives in London and we see often Emily phoning from an Std. Booth his son, but reaches only his answer machine. Sally, a girl from the neighborhood is in love with Brad, but he can´t answer her feelings. Another Neighbor, Rosa cheats on her husband with an insurance agent and wants to leave as well the Bow Barracks. Her husband Melville wants to stay, to stay “with his property”. Not only the many characters in this film are interacting with each other, the tension between the change and preservation gives this film a strange nervous energy.

Relatively late the titles appear with a song by Anjan Dutt, a song which tells already about memories of this place, “where stories are told and songs are sung” which reminds us again in the transience of this part of the world but as well in the cultural, social context of this special community.
Finally Bow Barracks forever tells about past and present of this quarter at the same time. Maybe Cinema is the best example for explaining the speed of light. And astronomer explains to Patricio Guzman in his film Nostalgia de la luz (Nostalghia for the Light) that according to light speed everything what we see is already past.
The narrative element of this “comédie dramatique” is evoking once the now and here of the characters and in the next moment all these biographies seem to be already history.

Bradley plays in a Rock´n Roll band and one performance is extended to a musical element (music by Neel Dutt). The time and especially the gravitation field of the plot is for a moment suspended. That happens with the title song (sung by Anjan Dutt and later by Sally) at the beginning and the end as well.

At the same time the film is witnessing an endangered place with all the people who are connected or disconnected with it. But it is also nearly exploding with life and emotions, violence, love, solidarity, tenderness.This “explosion of life" is again a kind of resistance against not only the decay of the buildings but also the decay of a cultural heritage of a community.

Another magical element in this film is the appearances, disappearances and reappearances of the many characters. Even though Anjan Dutts cinematic temperament seems to me closer to John Cassavetes than to Yasujiro Ozu, the film is righteous to each single character in an almost Ozu-like kind. All of them have their moment when they can shine for a while. Bradley in his Rock´n Roll performance, the stubborn Emily who decides at the end to accept the Bow Barracks as her home, Sally´s performance of the “Bow Barracks song” at the end in which she seemed to transform all her unanswered feelings for Bradley. Rosa finally returns to her husband for a reconciliation.
Bradley will be shot in his leg when he tries to defend Anne against his violent husband. There is a small and wonderful moment when we see in Tom´s face the sign of resignation and the realization of his own failed life. Even this most dislike able character has at least his own moment, a moment which escapes our judgement.

The end has a strange contrast. At the first sight it looks like a happy ending. Brad finally can marry Anne who is divorced from her violent husband and Emily will now accept Anne as her new daughter in law. Even a small tender scene between Emily and Peter give hints to a happier life. Despite all obstacles the community seems to have found new courage to stay, to renovate the buildings. But just after Sally´s interpretation
of the “Bow Barracks”-song, titles are reminding us in the still endangered condition of the buildings. The decay and the slow dying of a social-cultural heritage goes on.
Despite this happy ending, there remains a strange melancholy in me. The Bow Barracks, the people who lived there and finally this film. A film is in itself like a building endangered by a likely decay of its chemical matter and as mortal than human memories depending on the matter of a living body. The bitter sweet after taste I know since I love Cinema will sty in my mind..

This was the first film I saw by Anjan Dutt as a director (three other films I ordered on DVD are waiting for being watched). I learned he is famous as a musician and song writer. Until know I knew him only as an actor, one of these charismatic faces you see often if you are half-way familiar with Indian art cinema, especially Bengali Cinema.
Well, Bow Barracks foreverr and Anjan Dutt is one of the lucky discoveries I made during my last India journey. I am looking forward to see more films by him.

A text on ranjana ami ar ashbo na can be read here.

Posted by shomingeki at 5:43 PM