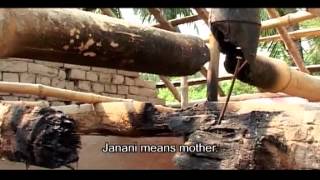 It is hard for me to understand why the whole Nandigram-issue remained relative unknown outside of India. This bloody conflict between Farmers in this region of West Bengal and the former communistic government of this Indian state which wanted to acquire land for an Indonesian chemical company.
I remember the film L´Encerclement (The Encirclement) by Richard Brouillette, this profound analysis of the neoliberal ideology. One reason this ideology became as dominant as it is now, was the fact that most of so-called leftish governments, including this so-called communistic government of West Bengal began to accept this central ideology of capitalism with nearly no resistance.

Anamika Bandopadhyay, like a lot of Bengali Intellectuals and artists was involved in this huge protest movement against the violence caused by the politic of the former West Bengal government, a violence against farmers, their women and children.
For me this issue would have remained unknown to me if I were n´t in Kolkata just at the time, in fall 2007 where big manifestations were held and where it caused a rupture between the intellectuals in West Bengal.
Red, like 1700 Kelvin, Bandopadhyay´s most recent film does n´t deal with the ideological debate but with the concrete danger for the physical life of the victims, women and children threatened and hurt, many of them raped, some of them killed.

At the beginning and at the end of the film we see Bandopadhyay and some other people (a journalist from Delhi among them) on a table discussing and exchanging their experiences they made during their interviews with victims. They try to find words for the terror they witnessed. A lot of them still look very disturbed. You can see it in their faces. Like in 1700 Kelvin this disturbance is visible and tangible in each moment of the film.

Between the documentary elements there is a recitation from the famous Indian national epic drama Mahabharata. In the background we see images of destroyed houses. Instead of an explaining over voice commentary (The facts of the Nandigram-affair are explained in the opening titles) there are two recitations of poems, one by the Bengali poet Joy Goswami and one by Anamika Bandopadhyay herself.
One excerpt from Ritwik Ghatak´s masterpiece Subarnarekha (part 3 of his refugee-trilogy), one of the greatest achievements of Indian Cinema shows a girl walking happily singing on a deserted airfiled. Suddenly she is scared by a strange dressed man. This excerpt from Ghatak´s film is a good key to the spirit of this film. I mean this certain disturbance, these concrete emotions authentic to the bones and shining through the technical and aesthetic apparatus of image making, through body and soul of the filmmaker until it reaches the spectator like a blizzard. We are not prepared, it hits us. We are getting an idea of the lack of any protection. Like the films by Yang Yonghi, Terrence Malick, Ritwik Ghatak or like in the film and text Les Mains negative (The negative hands) by Marguerite Duras, Anamika Bandopadhyays cinematic essays are manifestations of an unprotected and very vulnerable Cinema. It either moves us, goes under our skin or we remain blind and dumb.

Anamika Bandopadhyay is involved, It is evident in three interviews she made with victims of the violence caused by armed forces in service of the former West Bengal government. The first is a small boy who experienced horrible threatenings. While she is listening him, she tries to console him, caresses his head, a gesture of helpless tenderness. As a filmmaker she leaves the safe position of a voyeur and is now as exposed like the people she talks with.
The second victim is an old Muslim woman, full of despair. Bandopadhyay knows that it is beyond her power to help her  - but again her hands try to console her. She touches the old woman. That is all she can do for the moment. This bodily tenderness seems to me a sign of respect for a suffering human being who faced the danger of physical violence.

Another strong emotional moment is the interview with a woman who was beaten and threatened several times by the so-called cadres of the Communistic Party. Her husband is deaf and dumb and was unable to help her. This moment is what seems to me the summit of what I call the interaction between what or whom we are seeing, the person who is recording it for us – and finally ourselves who watch this film. Bandopadyay´s caressing hands are present again. She wipes the tears from the woman´s face, touches her shoulders and finally even hugs her.
These moments move me exactly in the same kind like the moment the big black woman who holds the hands of the mourning mother in Malick´s The Tree of Life. I am talking about certain directness without any mask, an involvement with what is shown to us, a kind of authentic drama relatively non influenced by the magic options of the apparatus of image making.
Where it comes from I do not know but it stays with me like an unforgettable heavy and sad dream I had.
A film has touched me is here meant literally. These hands are beautiful like a last gentle gesture in the light of a destroyed civilization.

Maybe the films by Anamika Bandopadhyay are tries to resist the “death of dreams in the eyes” of the people she shows in her films.