Another film afternoon in Abriés: The Bridges of Madison County by Clint Eastwood 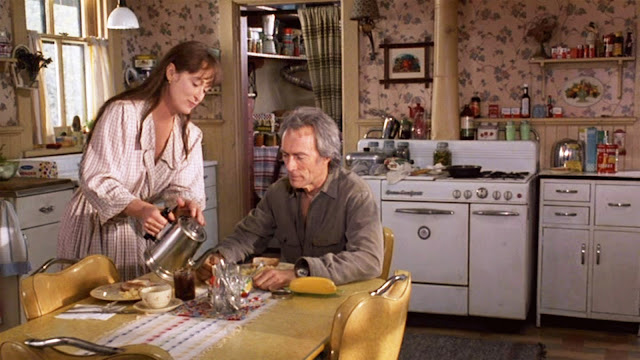 For Thérèse and Laurence.


Two days before I left Abriés I watched with T and L The Bridges of Madison County. It was a hot afternoon. This film I used to enjoy on evenings of very hot summer days like I am obsessed to watch Frank Capra´s It´s a wonderful Life during Christmas season.
Like some days before when I enjoyed with T Ozu´s wonderful Bakushu this afternoon had the same magic atmosphere. We three were absorbed by the film but at the same time the world outside of this film, outside this fragmented piece of the world was always present: The dog in the room who sometimes lay under the tables, L´s children were watching a film for kids upstairs and Ts husband was occupied by other activities – or even the cats who were invisible but present in this house. Even though I felt we three were in another world, the idea that for this 2 hours each of us living beings found his/her place in this house, a chilling idea.

The Bridges of Madison County is a film I like to call, Eastwood´s most Japanese film and not only because it remembers me in Keisuke Kinoshita´s You Were Like a Wild Chrysanthemum (Yagiku no gotoki kimi nariki, 1955). It is as well how Eastwood captured the atmosphere in a small town in Iowa in the 1960s and last but not least with a subtle but wonderful work of the production designer. It is as well under the surface Eastwood´s most complex work with time. The love story between the Italo-American woman Francesca in her forties and the photographer Robert n his sixties is told in a flashback. After Francesca´s death, her children, a son and a daughter in their late Thirties or early forties are reading her diary. What they can´t sense while reading her diary are the nuances we see in the flashbacks. Despite Eastwood´s Robert Kincaid is one of his finest role (beside one of his finest achievement as a director), it is Meryl Streep who offers her most nuanced performance. She herself was in her mid forties during the time the film was made. It is not only her usual perfection (like her slight Italian accent) but her ability to visualize the different “beings of time “ in the sense of Marcel Proust her character is made of. For the grown up children who remember her while reading her diaries, they remember her as a woman in her forties. But while we seeing the flashback there is a lot of nostalgia in her for her not lived youth in Italy where she met her husband, who took her to the real America, a country where she dreamt of as a young girl. Meryl Streep let her Francesca blooming for a moment, the woman in her mid forties turns for moments into the teenager in love.

Cinema is both, a time machine and as well  vehicle to travel to alternate worlds and it can evoke both: real memories and longings for a  life we haven´t lived. The love story the film tells about is finished before it is really lived and it has an analogy exactly to the essence of cinema why we are absorbed by these stories, a film is telling us. The Bridges of Madison County is a bit like Aparna Sen´s Mr. And Mrs. Iyer. We are not very sure if we witness a love story or if this love story is just evoked by us through the film. And like Aparna Sen´s film  The Bridges of Madison County  is as well a film about the strange ability, just let´s call it magic how cinematic images make us dream, remember and at the same time how they help us connecting with our own life.

And yes part of the magic of this afternoon was the fact that I saw it together with these two women. Even though each of us was absorbed by the film, probably involved in own reflections, dreams, longings etc.  We haven´t talked much but each of us enjoyed being together, sharing this film experience. From time to time the dog tried to get attention, we were listening what the two girls upstairs were doing but it did n´t really distract us really from watching the film.The more I remember this afternoon the more I feel like I fail to describe it. Or in other words. It has already become a memory.
I know there are cinephiles who think a film has to be watched alone and at best in the first row of a film theatre with as few other spectators as possible. For me cinema was always something I like to share with others. Even though I enjoyed also watching films alone and being just busy with my own thoughts, dreams, longings there remains the taste of loneliness. Just the presence of these two women who were like me absorbed by their own impressions, dreams or longings chased this bitter aftertaste of loneliness away. Again this feeling of Cinema as a lost dream, the idea what cinema once was. Despite we all three were in Ts living room, I sometimes dreamt myself into so much great film theatres which are not anymore in existence.

I remember  - as the film is well know as a sad film - there was a package of tissues on the table and I was the first to use one of them and I felt safe and secure to express my feelings.
It  is one wonderful but heartbreaking moment, just one short image after a hard cut. It is after the first time Francesca and Robert meet each other. Before they made a short excursion to one of these old bridges, Robert wants to take images of and later they had an evening dinner in Francesca´s kitchen (her husband and her children are out of town  for four days). Like in Ozu´s films rooms are also kind of protagonists. The kitchen is at the same time Francesca´s place for her routine duties as a housewife and mother and like the film will tell later as well the place of love and longing, a secret which only belongs  to her. The first night,  Robert left her home which ended in a kind of quarrel. When they have talked about their lives, he told her about his fascination for Africa, a place she never visited and she never will. In the night she hides a written invitation for diner at one of these bridges, her own action towards this short but intense relation ship. Than there is this hard cut and we see the rising sun of the morning. Even though we learn soon that Francesca will never leave this small town in Iowa for a moment this beautiful sunrise is connected to Africa a place she is allowed to dream of for a moment. For this moment we get an idea about her longing which is heart breaking and at the same time one of the most powerful moments for me.

Opposite to us three Francesca´s children are like two spectators watching a film (Francesca´s diary) with quite a different opinion about what they realize. Just at the end when they are drinking a brandy together, smiling at each other, they share the same opinion how to fulfil their mother´s last wish. And like in the films by Ozu, they are persons which made experiences which changed their predetermined opinions.
And yes, cinema has to do with experiences, the ones about the film is dealing with and the ones of ourselves, a complex chemistry between what we saw in the film and how it connects to ourselves.
After the ashes of Francesca is spread at the bridge we see this bridge from a bird´s  perspective.   the  Like all great films the film gives all the matter lent for its fictive elements back to the world. We are dismissed from this film in a kind only great films can offer.

In the last years there was always a time when I had to learn again to enjoy films without the burden of ideologies, theories and last but not least without another burden: the knowledge of so much films I have seen in my life. In Marcel Proust´s A la Récherche du temps perdu, the narrator describes several time his feelings while listening a special piece of music. A moment which often reminds me in how I see films. In another kind at the beginning of his novel, Proust describes his memories after awaking from a nap in the afternoon. A human consciousness includes always the beings of time of which we are made. Sometimes a moment or a scene can move us like it would have moved us in another time of our life,  as a child or as a teenager.. Clint Eastwood and Meryl Streep are aging, but the nuances Eastwood´s film offers gives these characters a depth and complexity which goes far beyond the length of the film, or the fragmentation of the world by the frame of the images.

When I was young I tried to lengthen the impact of a film which just ended. With a brother, a sister or a friend I tried to expand the objective limited length of a film in my imagination. On that afternoon in Abries, after The Bridges of Madison County ended it was a secret sign when T went out with the dog. L and I followed and for a moment we were like teenagers who wanted to be for a little while more among themselves.  For a moment I was in another time of my life.

We Cinephiles have often the reputation as strange loners. But on this evening there was a connection with the wonderful film that we shared with each other and the whole world. I can´t forget this late afternoon with T, L and this film and this strange feeling of being absorbed by a film but at the same time the awareness of being a part of the world. And this feeling still found in the evening another “sequel”. We all went out together with the kids and Ts. Husband to a place called Camping la Monta; Odel var where we had dinner. As we had to go outside of this jurta-like restaurant for smoking a cigarette, we saw at night the clear heaven full of stars. I looked at the heaven full of of stars like at an imagines mighty screen like it was total and eternal cinema.
Thank you T and thank you L for this wonderful day.