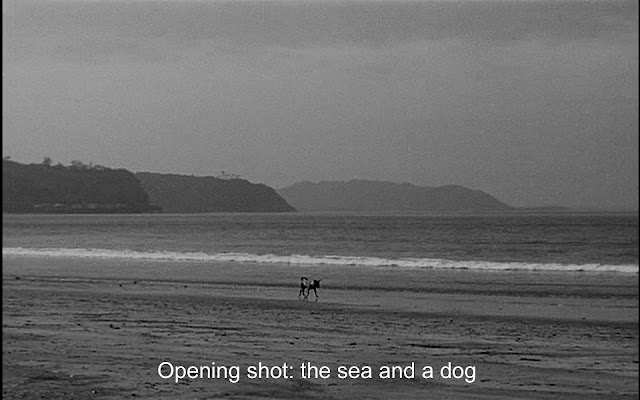 In Nostalgia de la Luz by Patricio Guzman we hear an astronomer telling that according Einstein´s theory of relativity everything we is at the moment we see it already past. It is impossible for me to understand this beautiful sentence not as well as a poetic metaphor for Cinema.

It was an afternoon in T, s living room. It was hot outside and as we wanted always watching a film by Ozu together, we have chosen a DVD of Bakushu with Spanish subtitles. I always loved this film which is since at least 10 years my favorite film by Ozu. Haven´t seen it for years but I thought probably a bit too often.
I was not prepared about the intensity of watching this film for the 20th. or thr 21st time.
I thought I had seen all the survived films by Ozu, fragments and his only documentary included.
I thought after nearly 30 years I begin to get tired in his work from what I saw almost the half more than 10 times.

After a very short time the magic of this film and the magic of Ozu which I thought I begin to loose came back with such a power I have neither expected nor which I am able to explain.

I know actually Ozu´s work is full of extraordinary films, including the most famous Tokyo Monogatari. But there is something special in Bakushu I knew for a long time and which I rediscovered by heart. It is one of Ozu´s most accessible, partly one of his funniest film and at the other hand in its episodic and non-dramatic narration his most radical approach to present “a circle of life”. And even today the unique narrative style seems to be almost vanguard to me. The film is totally structures in small every day events. The whole film is not a poem but rather a big collection of little poems about every day life. I had to think again of Adrian Martin´s wonderful essay on Terrence Malick´s The Tree of Life “Great events and ordinary Life”, because more than other masterpieces by Ozu, Bakushu has small but extremely powerful moments where these serial of ordinary events is linked to a cosmic dimension.
They talk about a son lost in the second World war and certainly dead. Only one glance of the mother full of longing in a direction unknown to me gives a hint to her mourning. Then we see wind buoys in the heaven. And at all there are a lot of human glances upwards to the heaven, the most beautiful when the old couple are talking about if their life was happy or not. Then they discover a small balon in the clouded heaven. Just the clouds are between their eyes and the eternity.
Especially near the end this “big events” invades  into the every day moments. The most beautiful is when the old father has to cross a railway crossing, barriers come down and he has to wait. He sits on a stone. sighs and we see behind him the passing train.
At the end Ozu presents with one subtle gesture the everyday routine with the passing of things, the inevitable change through time. We see at the beginning Setsuko Hara the daughter several time put off her apron, at morning when she goes to her office work and at night before she goes to bed. At her last evening at her parent´s place (she will marry and move with her future husband to a faraway city), she does the same and suddenly she feels the whole weight of this change.
But what shall I tell about a film I wrote several times about and which I saw at least 20 times?
There was something special on this very afternoon. It was like I saw this film for the first time like it was 24 years.
There was a freshness in seeing this film again and I have the strong feeling not at last because I saw it with a friend who is probably even a bigger admirer of Ozus films. We all were really totally absorbed by the film. Sometimes her dog came wanted to get some attention. Once we even interrupted the film for making coffee. But all these were no distractions in this breathing soulful body of a film.

Even though like I mentioned – it is by far neither a bleak film like Tokyo Boshoku, Hitori Musuko or Tokyo no yado and it is not such a film like the concentrated mourning in Tokyo Monogatari. But then there it was again my old comparison of Bakushu with a family photo album. More than 24 years before there is always a shadow over the soft heartwarming humor, because like in a photo album we feel the mortality of the people. The more the film moves to its end the more I felt; My god these wonderful people are going to die.
It was like I witnessed images from a lost paradise which is already lost in the moment I see it.
It was more. The film spoke to me and her. We shared this experience. This special kind of sharing the film with another one gave me back all the love for Ozu which seemed to me lost.
And there was almost another aspect of a “lost paradise of Cinema” Wim Wenders on Ozu):
Films are made to be shared with others, at best in good film theaters but also at home.
This happens mostly on film festivals and more rare in art film theatres. Cinema as a a place for sharing dreams, longings, fears, mourning etc is disappearing.

The kind she shared with me the film gave me back all the love I felt once for Ozu. We talked very few. From time to time one of us took a tissue from the table.
I felt safe and comfortable with her and this wonderful film. For a moment, just for a moment I got a clear idea for what Cinema especially these films by Ozu was made. And for a moment all my life, my longing, my grief , my love to Cinema and for the people close to me were there almost touchable in this living room in a house in a small village in the French Alps.
It was like Ozu, the poet sang a song for us and we sang along with him.
I felt close to the dog, lying under the table.
I think I can´t properly describe what I experienced on that very afternoon. It was not only the film but it seemed to me the film was like the house, the living room where we sat on that table. It was like the film created a special space for us.
The paradox was that I have suggested this film but it was her presence who gave me back this wonderful film.
I shared this wonderful experience with her and at the same time I feel having it shared with the whole world.
Thank you T.

Posted by shomingeki at 8:11 PM