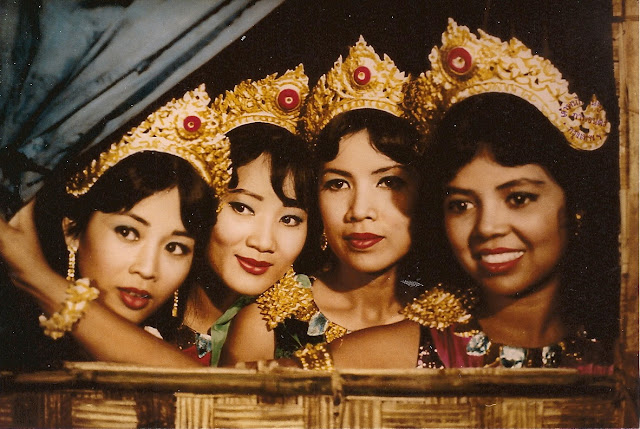 What a beautiful strange and heartbreaking little jewel: It is a fantasy film like 12 SISTERS  where its imagination is lent from the rich realm of Cambodian mythology, mixed with slapstick elements and social melodrama, If the 16mm print (which was screened yesterday) gives and idea how this film would have look in a full restored 35 mm-print, I imagine one of the most beautiful color films right on the level of Jean Renoir´s THE RIVER or Powell & Pressburger´s THE RED SHOES.
Beside all the fairy tale like spectacle, it is at first a drama about the hard life of poor peasants and a love story between a peasant and an immortal angel  (called a daughter of heaven) who lives for a limited time as a human being on Earth. It seems like cinema not from another country but from another planet, more engrossed from me and my time than the "objective" 45 years of its existence. It might seem strange to me and my limited western condition - this mixture of extremely funny and burlesque and on the other hand extremely heartbreaking dramatic scenes. But I don´t now how and why - it works wonderfully.
I remember a nice little text by German filmmaker Christian Petzold on the DVD Cover of a speical edition of Richard Fleischer´s 20000LEAGUES UNDER THE SEA (1958) where he talks about cinema as a view into a world which has gone or which is already lost. This feeling I really had while seeing two films from the Golden Age of Cambodian cinema. Like I mentioned in my text on 12 SISTERS, it is hard to push away the terrible thought that all people you see in this film, all technicians and a big part of the audience who loved this film at the time of its theatrical release are dead, unless they had the luck to escape Cambodia. Cinema as a view into a lost world has considering the Cambodian films a new and bitter meaning.
This period of Cambodian can never be discovered in its full glory. The three films shown in Berlin and probably (I hope so) other films which might have survive won´t be more than a telescopic glance to a star which has gone long time before we see it.
It is a privilege to have seen such films as PEOV CHOUK SOR.
I feel a bit like Ingrid Bergman in Roberto Rosselini´s masterpiece VOYAGE TO ITALY when she faces the  in lava forever preserved corps of two lovers.