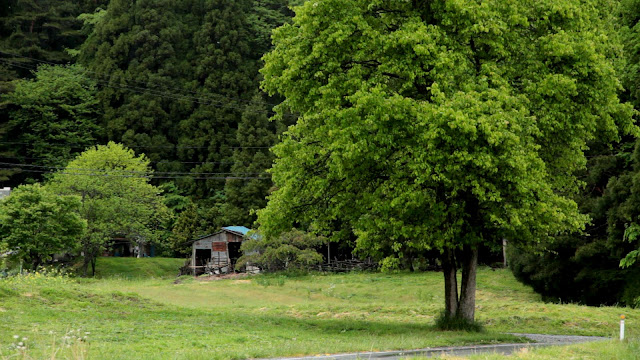 The first term which came into my min when I saw this film yesterday was "beauty", a term no one actually connects with the disaster of Fukushima. But this beauty is a lost dream. While we see at the beginning in long camera movements the destruction caused by the Tsunami, we see later natural landscapes or landscapes cultivated by men.
The radioactivity which contaminated the plants, the flowers, the trees and which is a deadly danger for animals and men remains invisible.
No speculative, sensational archive material is used in this film, The "sensations" are the wonderful old people Fujiwara met on his wandering through this "zone". Yes this "zone" or this stalking through it by the filmmaker can remind you in Tarkowskij´s STALKER. But the film works on different levels. There are these old people, farmers, part time farmers or former farmers which were hardly mentioned in the medias. The medias were busy with their doomsday porn sensationalism provoking rather paranoia even in far away countries than compassion or solidarity.
The film distinguishes between natural disasters and man-made disasters like the the destruction of the nuclear power plant and the politicians or the medias which lack any trace of sensibilty. There is also an analogy to the filmmaking, evident in two kinds of over voice. The one is from Fujiswara talking to the people and the other is a reflective sometimes even poetic text spoken by Armenian-canadian actress Arsinée Khanjian. About using Khanjian for the more reflective over voice, Fujiwara mentioned in the Q & A session the "refugee-aspect, referring to the people who have to leave their homes behind and who don´t know when or if they ever will be able to return. As Khanjian is a refugee, she is also present in my mind for her role as an exiled writer from an unnamed latin-american country in 2 RUE DE LA  MÈMOIRE by Chilean filmmaker Marilu Mallet.

There are the interviews which give  lot of space to the people which are interviewed and which get or better keep their own independence from the intentions of the filmmaker. Some moments, especially these often extremely long and extremely beautiful camera movements have the quality of a nearly musical composition. We see natural landscapes and landscapes cultivated by farmers. As the films distinguishes the things and the beings it shows it is distinguished in its formal approaches - it demands first of all to have an attitude. The german word for attitude, "Einstellung" has a double meaning, it means as well a technical-aesthetical as an ethical one.

A good film is always like a journey. We get not always the confirmation of that we were expecting to experience. Sometimes we are even "disappointed" but we get insights in things we never knew before - and more important we are activated to re-define our attitude (Einstellung) to the world around us the people we meet included.
In the case of NO MAN`S LAND we learn about things Fujiwara wanted us to see but as well things we experience with Fujiwara.

It is a film about destruction, grieve, mourning about the loss of home. But it is also at the same time a film which celebrates the good old fashioned "solidarity" or compassion for people we have known before only as anonym numbers. The many green trees we see in this film might be contaminated for a long time. But they are still alive.
We don´t know what will become of the old people in this film - the ones who return only to their homes to clean up, feed the animals or repair their houses or the ones who are already disrooted and who are already evacuated. As absurd it seems that most of the people will be able to return in their contaminated homes, we sympathize with their hope.

Sometimes we hear the over voice comment spoken by Arsinée Khanjian, sometimes Fujiwara talking with the people, music and sound. But in intervals we see only images without any sound, in total silence.
In this film there is a time to speak and a time for silence. Fujiwara has the courage to answer sometimes with this total silence to the strange and perverse images the mass medias planted in our brain about the disaster of Fukushima. And silence- we all know can be a kind of resistance.