Notes on FOR ELLEN, by So Yong Kim, USA: 2012 Berlin Filmfestival VI. 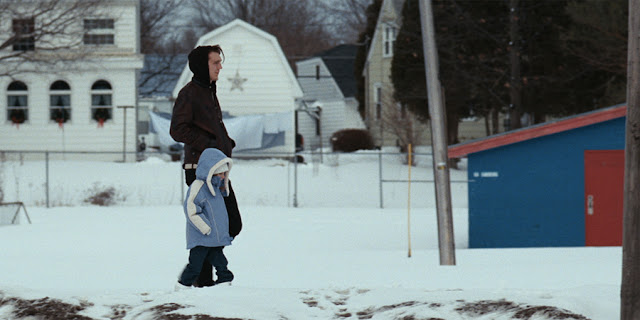 Sometimes, a film needs only a few magic moments to be saved as unforgettable in your memory. FOR ELLEN, a film by Korean-American filmmaker So Yong Kim is rather structured in situations than in a plot. Job Taylor is a rock musician. He is divorced and the little girl he has with his ex- wife is almost a stranger to him. We see him often alone, in his car or in his apartment trying to find inspirations for the new album of his band. Nothing works really good for him, the relationship (we get an idea during his phone calls) with a co-musician seems difficult  and his new girlfriend appears very seldom.In the first half of the film we learn mostly about Joby Taylor, struggling with legal inconvenience about his divorce, drunken in a bar or alone in his car. All is framed by a winter landscape, filmed in Cinemascope.  Sometimes we are very close to the few characters of this film, sometimes men, if in cars or not are lost in this eternal snow covered world.
Joby is a lost soul, unable for a change and unable to break with his old pattern. In some moments he seems to  be a post modern version of John Ford´s Ethan Edwards from THE SEARCHERS, a person no one really need. The only persons who probably needs him is his girlfriend who finally will be abandoned by him. While his ex-wife refuses to allow meetings between him and his six years old daughter, he meets his lawyer who is hardly able to help him. Finally he gets the permission to spent some hours with his daughter. This encounter I would like to call the heart of the film. Both are reclusive, the father like the daughter. The first dialogues between them is monosyllabic about toys, ice cream or ponies interrupted with moments of silence. I a restaurant we their profile, she on the left, he on the right side in the frame. When they are silent you almost hear them think. You can feel the efforts it takes for them just to move their lips to form in words what they feel. Later when they ask each other questions, the girl suddenly paused with a sad expression on its face. Finally she asked the most essential question, why he never cared for her in all these years. It is a moment hard to describe, because we hear "the grass growing" like a German expression says. You see the emotions on their faces before their expression in words and you also see the difference between an emotion and its verbalization.
There is a last brief meeting between Joby and Ellen outside of the legal agreement with his ex wife. He comes through the window in her room, she plays for him on an electronic piano Beethoven´s "For Elise". He is close to tears and disappears. The film does n´t tell anymore what will become of the relationship between Joby and Ellen ("I can´t call you father." I love these scenes because it gives a small idea about the life neither daughter nor father have really lived, because they are strangers to each other. The film does n´t tell a story, it offers possibilities for a story. And there is an analogy to life as an universe of possibilities: some are lived others remain un-lived forever.