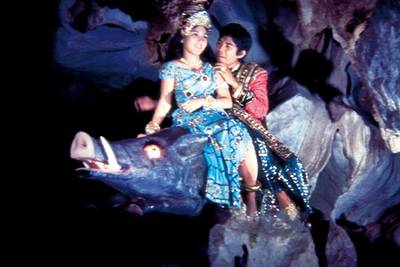 First of all, it was a very funny film, a mixture of fantasy (probably lent from the realm of cambodian myths and fairy tales), Harryhausen-like special effects, slapstick, action, horror, romance etc. The soundtrack includes not only music which we can connect with southeast Asia, but as well excerpts from Bernhard Herrman´s composition for Hitchcock´s VERTIGO or PSYCHO. Further it is also a costume film.
You talking skulls, cannibal women, flying horses, magic oranges.
Sometimes the film refers to splatter movies. At the end the film which mixes so much different forms of cinema it turns even into a tragedy.
Obviously made for an audience in Cambodia and Southeast Asia (the only available print which was screened was in Thai-language!)
In a way we know the childhood of cinema began in amusement parks end of 19th, beginning of the 20th. Century.
To enjoy this film takes a bit of imagination. I tried my best to imagine not to sit at the cinema "Arsenal", but to sit in an cambodian cinema in the 1960s.
It sometimes works. But sometimes I just watched at the colorful decors , the fairy tale -like atmosphere. Than it is less different than the sunday afternoon films I grew up with. Like I mentioned, Ray Harryhausen was one of the first names which came into my mind, films which were in my childhood real miracles for me. Shall I try to see this films from a film historical point of view or shall I just capitulate against this charming, hilarious strange and beautiful creature from Mother cinema?

The  morning after this remarkable screening,  I had an uncanny thought. I know the director is still alive, he was present at the screening. But about what we know about Cambodia, it could be that all the actors and actresses I saw in this film are probably killed by Red Khmer unless they escaped like the director Ly Bun Yim. Even most of the films made before the Red Khmer regime were destroyed. How many actors, actresses, technicians, costume or production designer and directors were killed by these bastards, I don´t know.

Again there is a choice, to watch this film in the naivety, I used to have when I was young or shall I watch it from a historical distance. Than of course - I will stumble over the Cambodian tragedy. A bit more than 40 years old this film has something of an antique vase or a ruin which gives hardly more than a vague idea of its time. These 40 years seem to be in context to cambodian time, severely centuries.
Sometimes cinema is as fantastic and magic like a time machine.

It was only one screening, February 13, 21.30 at the "Arsenal".
infos from the Forum programm for that film: here