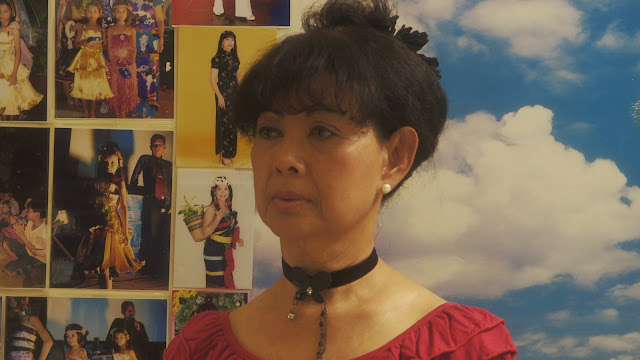 (Dy Saveth, one of the stars of Cambodian cinema)
(International Forum)

How do we remember films we have seen once, films we made, have performed in or have worked for as a technician or even just as an extra  - which are not anymore in existence? Films which will die with the last person who still remembers them.
Imagine, like in the case of Cambodia you have lost people close to you, killed by the Red Khmer. You don´t even know where their corps are buried.
Late Serge Daney the french film critic said about the Cambodian genocide in comparison to the german Holocaust that there are almost no images, no documents left about it in Cambodia. Only the skulls are the grim witnesses of the worst chapter in Cambodian history.
GOLDEN SLUMBER is a kind of Chou Davy´s pendant to Patricio Guzman´s  NOSTALGIA FOR THE LIGHT. In both films there is an analogy between the search for the truth (in Guzman´s films we see geologists, archaeologists astronomers and the women who are looking for the physical remains of their loved ones, killed by the butchers of the Pinochet dictator). In Chou´s film we have the film people who try to reconstruct the still young and short period of Cambodian cinema from 1960 to 1975. Almost all films are destroyed by the Red Khmer who let them decay, most of people who worked for these films are killed in the death camps or in very few lucky cases they escaped to Europe or Northern America.
Dy Saveth, an actress and one of the few surviving legendary persons of Cambodian cinema has a collection of photographs. Memories in films which are deleted from the public memory forever like most of the people who worked for these films. Sometimes you only hear people talking on films they still can remember and about the film theaters where they watched them. Sometimes one of the most famous survivors among the directors, Ly Bun Yim sings a song from a lost film or he recapitulates a scene of his last film made in Cambodia before the Red Khmer were established as the political power, a film which was never screened. Ly Bun Yim is something like the Cambodian Ray Harryhausen, a master of special effects.
When Chou researches in Cambodia for film theaters, he does´nt find more than an archaeologist in the ruins from the ancient Greece or Rome. Some of the big film theaters are restaurants, Karaoke bars or emergency accommodation for the poorest. Some old people still remember the films. The only thing Davy Chou can do is to record these memories. In such moments GOLDEN SLUMBER reminds me in the end of Truffaut´s FAHRENHEIT 451, where people try to save the forbidden and burnt books in their memory. But human memory will die with the human body. But GOLDEN SLUMBER is as hard as it is to believe a documentary about a still relatively young chapter of the history of the 20. Century
Can´ help thinking of Dura´s heart breaking  text from her film LES MAINS NEGATIVES, this imagined dialogue between a human being from a cave 30000 years ago and a person of the present. . Through this tiny traces which are left from the Golden Age of Cambodian Cinema there are always the even tinier traces of identities who disappeared without any trace. We know the number of around 1.7 million people killed by the Red Khmer and we know that any famous or less famous technician, actor, actress or director who wasn´t able to escape was killed too. In some of them people still remember, others are deleted from the public memory of history.
It is told in this film that film theaters especially in the early 1970s were full packed. Most of the people who shed tears, their laughter, their dreams, all their emotions evoked by these films are lost, the lovers who watched these films together turned into nameless human remains, skulls bones and ashes.
Can´t get rid of these thoughts and I never will.
When I watched 12 SISTERS or PEOV CHOUK SOR I feel the traces the ghosts of these people. It is uncanny.
This thoughts shining through this films actually made for entertainment - are very hard to bear.
There are retrospectives which help us to discover unknown films from unknown countries. The lost history of Cambodian cinema which exists only  in a handful of films, photographs, songs and memories of some people can never be re discovered in its full glory.
At the end a few excerpts of the few survived film prints are projected on a wall of bricks which remained from one of these film theaters.
We can hardly recognize anything. We hear the bad preserved sounds of theses excerpts. Some of the images are not reflected from the red bricks but swallowed. What we see are phantoms and ghosts.
These are uncanny images and they are close to my feelings during watching the films.