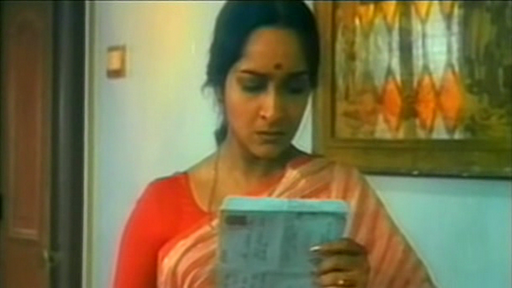 
Agantuk is the last film by Satyajit Ray. I have seen this film first time at the World film Festival in Montreal in 1992 a few months after Ray passed away. Despite Rays world reputation his last three films were received very controversial. His second last film "The Tree and its Branches" provoked a public discussion between Ray and the film critic Chidananda Dasgupta as it is documented in the book " Ray on Ray by Pradip Biswas.

Like most of Rays last films, Agantuk has as well the reputation to be non-cinematic. On the surface it is a very dialogue-oriented film. As his Rajadyakha wrote in his essay "Beyond Orientation" (Sight and Sound, August 1992, reprinted in the catalogue for the Vienna Film festival 1999) that Ray in his later films mediated more and more informations with the sound and that the "images only illustrate " what is told by the dialogue." I can´t agree with that - especially not in this simplification.

Agantuk takes place mostly in private rooms. A decent moved camera seems to act totally independent  from that the characters are talking about. Sometimes it stays on a face another time it divagates to accessories of a bengali household. As important dialogue is in this film - it is not the dominating element.The more often I see this film the more I discover small gestures and especially the almost musical pointed pauses between the dialogues. Gestures and facial expressions  emphasize sometimes what the persons are talking about but another times they seem opposite to the dialogue.
We are introduced to the characters of the film like we are introduced to a bengali middle class family. The first scene takes place in the outer room, a kind of parlor, the link between public and private space where guests are received and from where you can go to the private rooms.
Subindhra Bose, his wife Anila and their small boy Satyaki are surprised by a letter addressed to Anila. It comes from a person called Manmohan Mitra who is Anilas uncle and  only living relative but her child hood memory in him is very blurred. In Anilas childhood there were circulating wonderful stories about her uncle who has aft his family and home town at a young age to travel around the world. . He announces his visit to the family Bose.

Subindhra is skeptical, because he thinks this uncle could be as well an imposter intending to get his hands on Anilas inheritance. Probably he might feel rather disturbed in his petty bourgouis quietude. Anila expresses slight reservations against her uncle but her face reflects already affection for this humorous and intelligent man. The heart of the boy Mitra has already won unconditionally. Very early the film offers three possibilities to look at this strange uncle: the skepticism of  Subhindra, this pending between longing (the uncle is a kind of childhood myth for her) and affection of Anila and finally the unprejudiced attitude of the boy. This is a film where we just learn to know the characters piece by piece. Before the film begins to go through the first of its many transformations it is at first a subtle comedy between doubt and affection.

Pradip Biswas called Agantuk in his book "Ray on Ray an autobiographical film. Further is written there that Ray suggested to Utpal Dutt the actor who played Manmohan Mitra that he shall act as his (rays) speaking tube. Several times Manmohan Mitra will sing verses, once reciting the many names of Krishnas, than "who gives life". I can clearly identify Rays baritone which replaces in this moments Dutts voice and where Ray als acts as a sound engineer. With Manmohan Mitra, Ray creates a strange character which is fictive and on the other hand an "alter Ego" od Satyajit Ray. During my travels to India, Pradip Biswas (a friend of the Ray family) has told me that Ray had the dialogues written for Utpal Dutt densed out of own dialogues. As I trust this source I feel confirmed in the remarkable and disturbing scene of the "cross examination" in the last Third of the film. Subhindra will invite a friend, the lawyer Sengupta who (knows about imposters" and who will find out about the "true identity of the uncle" in a cross-examination. This scene will have the the density of an extreme almost absurd drama and at the same time the authenticity of a real dispution. That will look like someone is dreaming about a real experienced disputation where real persons like the lawyer Dasgupta get a demonic-irreal tendency.

The evening before the Boses invite a friend, a  curious comedian. This is a humorous scene because Rabi Ghosh more known for funny roles in films by Satyajit Ray seems to play himself. This first "cross examination is a little sketch emphasizing the humorous aspect of Ray which is confronted with the later earnest Cross examination.
In the later serious cross examination it is no accident that the lawyer Dasgupta is played by Dhrittiman Chatterjee, an actor who was often seen in fathomless roles in films by Ray.
Actually this cross examination begins quite harmless. They have tea and it begins with polite conversation. As Sengupta begins to asking his first questions to Manmohan in this case about his opinion about religion, they have to interrupt their conversation. Anila will perform a song by Tagore and play on an indian string instrument. And just like that - the scene which just began will be interrupted and another scene will be interwoven.
Anila sings:


This is for my side one of the most beautiful scenes from a film by Satyajit Ray. While Anila sings, the camera sometimes leaves her and slides to accesoirs, and decors, art works and wall carpets. Even though it is Anilas on that the film is focussing now, she seems to be isolated from the other persons in this room and rather a living part its decoration. She who is neither participating in the mens talk nor to included by them seems only have this song by Tagore for telling about herself or demonstrating her presence. She sits on a kind of divan bed quite distant from the table where the men are sitting. Her spatial distance is adequately to the engrossing character of this scene in relation to the films narrative. This scene which has just interrupt another one seems to have its own gravitation field. The film becomes in this very moment a scene where a woman sings a song and this moment will evoke emotions which won´t be commented or verbalized in any other dialogue of this film.

Manmohan Mitra mentions that this song reminds him in his late sister (Anilas mother). And now the film spins further the interrupted scene. The conversation is still on the level of a polite interview. Sengupta interrogates Manmohan about his opinions about the institution of marriage, religion and the technical progress and later about his motivations for and experiences during his travels around the globe. Mitras answers might be really like a compendium of Rays world outlook (assumed you have a good knowledge about Rays work). "Your questions don´t bring you closer to the truth" says Manmohan ironical and compared Senguptas questions with the peeling of the different skins of an onion. More and more the conversation turns into a cross talk. When Manmohan is asked by Sengupta what he thinks about cannibalism, he answers with a hint to weapons for mass destruction. When Sengupta mentions the sexual generosity of jungle tribes, Manmohan reacts with a taunting praise of the matrimony as a holy institution. Sengupta who has underrated the eloquence of Manmohan stands up like preparing a pledoyer in a courts room. "Sit down. You are raspy. I will overtake from here." The disputation leads to Manmohans passionate speech: "Why you don´t see that I am not a savage? Rabindranath (Tagore), Freud, Marx, Shakespeare - they are all in my blood. If I were a savage I wouldn´t need them. I regret that I am not a savage, but what can I do?" Finally it will be Sengupta who disputes Manmohans place in this house. "Either you tell who you are or clear off."
Then after all the cross talking an uncanny quiescence dominates in  this roo. Before Sengupta is leaving the house, Subindhra complains about his rudeness. Later, when Subhindra wants to apologize to Manmohan, he just raises his hand to demand silence. We see Manmohan from his back sitting strangely attached in his chair. This gesture ends this scene like it was a sign of the director.

At the next morning, Manmohan has gone with his whole package, the keys are on the table. The family begins to look for him because even the skeptic Subindhra has taken now the uncle to his heart. First they visit the notary of the family because as the last living child of his family Manmohan has inherited a grand sum of money which he never touched for decades. They find him later in a jungle village of the Khols (one tribe of the native indians). A bit separated from the action which is going on in this village he sits on a mat. They persuade him to go back to the Boses but only after he has seen a tribal dance performance. He also tells that he has to do some business in the city next day. By the way, he mentions that the Khols were in the 19th century the first who rebelled against the british occupations. Now they (representatives of the modern urban India) in a village of the oldest civilization of India.
The dance begins: Men are playing on flutes and drums, women are dancing holding each other. They move back and forwards. We see again Anila who watches this performance with an engrossed glance and claps her hands. Subindhra encourages her to join the dancing women. In between we have learned that the talented Anila is not only a good singer but also a dance who gave all that up for her family. At the beginning a bit shy but soon very decided she links her arm with the dancers and is totally absorbed in the dance. Just her dress seems to be alien among the tribal women.
That is also a wonderful moment and as well one of the rare moments in a film by Ray where we see a happy woman. Even though just in this small  moment, Anila can live her longings.
And finally it is not the dialogue alone but these moments which bring one "closer to the truth."
Agantuk belongs to a class of late works made by great directors (who can already look back on a rich work )which have a modesty and a freshness as such directors want to discover the cinema new again. Agantuk has in common with another masterpiece by Satyajit Ray, the equally rare screened Kanchenjangha (1962) that seemingly very few is happening. But when this film is going to end we feel that we are enriched by many wonderful experiences.
With Agantuk it is a bit like with this uncle Manmohan Mitra. At the beginning one doesn´t what it is all about. But step by step the film does the same with us like Manmohan with the Bose family: it conquers my heart.
At the end, Manmohan passes all his possession to his niece Anila. It is also a beautiful metaphor for the film which gives you literally everything what Satyajit Ray has to offer. 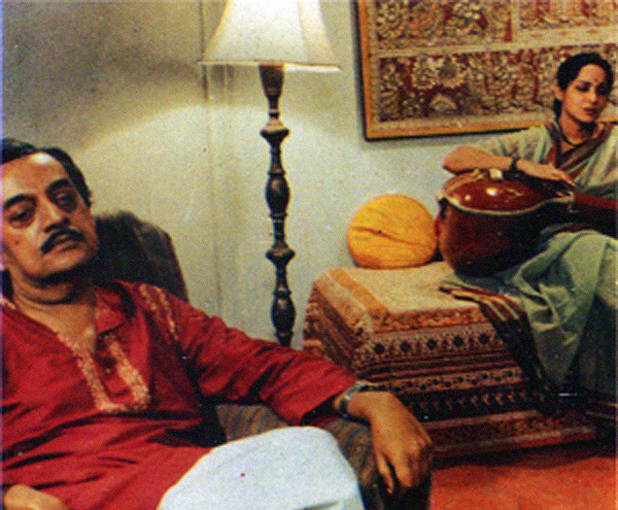 Posted by shomingeki at 3:53 PM