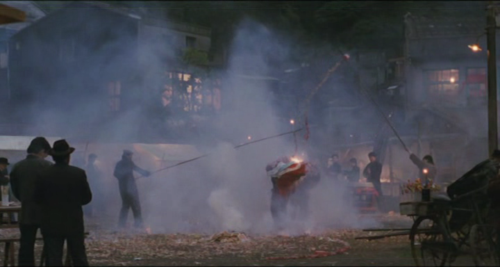 A CITY OF SADNESS

I.
The titles: simple dark background, light signs. From the off, we hear the speech of capitulation by the japanese emperor. A turn up like the light at the end of the tunnel in LIEN LIEN FUNG CHEN (Love, dust, wind). The first picture appears like a photograph which is going to be visible in the developing fluid. A corpulent man (Wenxiong, the oldest of four brothers of a taiwanese family), who prays and burns smoking sticks. Weak light. In another part of this house a woman who gives birth to a child with cries of pain. Parts of different dialogues, the noisy walking of Wenxiong. At one time the electricity comes back , a lamp is switched on. With almost ritual precision, Wenxiong enfolds folds the lampshade and leaves the frame. The lamp and a part of the room - deserted. From outside of the frame we listen the confusion of different voices. and again the cries of the woman, which disappears into an electronic roar, that seems to come from far away of space and time of this film. Then the second part of the opening titles: symphonic synthesizer music, the break between the time of the plot (the first years after the second world war) and the time of a cinema of the Nineties. You can call it the sound of the time machine cinema, which carries us in time and space from the present and brings us back to it.

II.
The family Lin during preparing of a party. Wenliang, the third brother´s return from the war is expected. A view into a room, additional narrowed through interiors. In the narrowed cadrage the busy activities of the persons, the father who burns sacred money, the woman, who are managing the household. Parts of conversation, which consist them like in a puzzle to informations. Often, the persons leave the cadrage an enter again, from the small visible part of the room into the one of imagination. III. In the longest shots of the film, the camera remains invariably an observant view from a distant angle. Persons who eat, drink and talk, Scenes which constrains the dramatic subject. The passing by of the men and the things conserved in little eternities of about three minutes long plansequences. At the beginning of the film, there is a meeting of intellectuals in a bar. Sometime they begin singing a nostalgic song. Someone opens the window in the background of the middle of the picture: a blue quadrat , in which the view can escape in the deep of the frame to the outside. The liberation of the view out of the imprison of a limited room. No information that one of the persons Hinoe will play an important role in the film. A cut, which does not interrupt the soundtrack, to a mountain landscape occupied with lines, like a railway net. The montage, which does no build the meaning, but offers possibilities to make links in your own head.

IV.
The corridor of a hospital. The screen is narrowed through walls and columns, double framed which makes the room smaller than the half of the film format, in which the acteurs are moving. The view is again to escape until the entrance gate of the hospital, where daylight and green plants promise the freedom. This image returns more times in the film varied, perhaps in the same composition. Once, after the first bloody confrontations, this narrowed frame is crowed by doctors and nurses, who treat and carry injured people. The world seems to be reduced on this little peace of space. It is night.
No light at the end of the tunnel.

V.
Opposition members meet in the flat of Wenqing, the youngest of the four brothers. He is deaf since his childhood. While the others are talking, Wenqing and the nurse Hinomi are sitting close to each other. Even though in the same room with the discussing opposition members, just centimeters from their table dominates for a moment the story of this couple. From an recordplayer comes the “Loreley” song "I don´t know, what shall it mean". The communication between both is limited in the exchange of little written papers, which appear on the screen as long titles like references to the silent film age. In writing, Hinome explains the deaf the story of the Loreley-saga. An intimate scene of a beginning love story, which asks the same attention like the information about the Killing in the confrontation between the KMT-government and the underground movement and the civil population. In a time of violence and terror, long lyric sequences like little islands, where you can escape sometimes.

VI.
The variability of languages - Mandarin, different chinese dialects, taiwanese and japanese - is at the same time a crisis of communication. The subtitles are not only useful for Europeans. On the other hand: Inserts, titles or spoken letters and diaries as voice over. The women, almost without any power are the real chroniclers. The propagandistic radios peeches of the government, are confronted with the personal reflexions of the women, especially of Hinomis. The public history and the history of persons whose voices will be disappear from the history books. The spoken and written language as a chaos or as as effort to make meaning. Language which reaches it´s limitations and which finds on nonverbal levels correspondents in glances and little gestures. BEIQING CHENGSHI is also a film about the language, that tries to name and about the things which are talking itself.

VII.
The deaf Wenqing is imprisoned. From outside half covered through the grating, a little group of imprisoned. At the first sight, you do not recognize any terror before the death. Emotions, of which you got only ideas if you look between the little gestures which seem sometimes be reduced on simple mechanical functions of arms and legs. A name is called. Bodies from which only the torsos are visible who are embracing each other for the last farewell. Fragments of a tragedy, which is going on in the invisible. The door, which breaks the gaze into the compartment is opened, a man is taken away by an armed man. Some times later, someone is shooting. Some moments later, Wenqings name is called. On the face of his companions he realize, whose name was called. Again the door is opened. They bring him through a corridor, which seems to be reaching an eternity in the depth of the of the film image. The camera remains invariably, does not follow them. At the end of the corridor, they open a door and shut it. Then the deserted corridor like a tunnel without an end. There is the idea of the incredible terror, a nameless danger.
No light at the end of the tunnel.

VIII.
Wenqing is only able to communicate visual or writing with his environment. He is photographer. Like his diary- writing girlfriend, he is also a chronicler of events out of the public history. Often, we see him watching or retouching photographs on a lighted desk. Through the light, strange almost unknowable chimeres, sepia-colored phantom beings suspended from time. The whole film is no big family-saga, more an over dimensional family album. Every image is a witness of the presence of men and things. Every image with it´s own fragmented story. BEIQING CHENGSHI is closer to a film like Ozu´s BAKUSHU than Xie Jins THE TOWN HIBISCUS. Perhaps independent from Ozu, the same deep research for the destination and meaning of cinema and it´s basic element: the photographed picture. The persons are not only suffering under history, they try to record and preserve history, maybe in the unconscious idea of their own mortality. The photograph of the eldest( killed) brother on a funeral carried by relatives, the try at least to save a very small part of the life out of the time and conserve after the death. One of the last scenes, which reminds me in a strange kind in André Bazins essay "The ontology of the photographed picture": Wenqing in front of a mirror, preparing his hairs in almost ritual manner. Hinomi and their child are sitting in a painted decor, a paper decoration, with painted chimney, painted vase, painted window. Nothing alive. A false idyl, the dream of a better life out of the reality (out of the life). The klick of the photo camera. The picture is freezing, the position of the persons is likely them of mummies. From the off we hear the voice Hinomis, who tells, that this pictures is made three days before the arrest of Wenqing. But he insisted to finish his work. Since days, she does not get any news from him. It is not told, but their remains the sure feeling, that Wenqing was executed.

IX.
Images, scenes, which are not able for summarizing. Scenes which appear like strong divided rooms of a building and can not be simply connected by the montage to a story. The montage offers a number of possibilities for combinations of this sometimes fragmented or even mentioned stories to connect them through the own imagination. Very few flashbacks, diary texts spoken from the off like little underground corridors, through which you can find ways from one piece of story to the next. The plot, you read in a synopsis is partitioned in different stories, which keep themselves independent from the "main plot" its autonomy even when they are connected with each other:
The story of Wenliang, the third brother, who returned from the war, in which he was driven by the japanese occupants into a mental wreck, who turns caused bis his lability in criminal circles, who is imprisoned as an colaborateur and who is stroken to a physical wreck in the prisons of the KMT-regime. The rest of his identty is the forbidden eating of almost spoiled sacred fruits. It deals also with the Story Hinomis, Wenqings and their love story or the story of a family who suffers under the KMT-government which is like a continuance of the japanese occupation. Even the second brother (a doctor), who did not return from the war at all is present in a little story. His wife cleans every day his instruments, hoping he will come back. A list you could fill with more examples. These are the stories of the nameless, who won´t be in the ent history books. Stories like splinter of a broken glass. Facets of human lives, that let shine for one moment the uniqueness of one of them through: The death of the elder brother. His death caused by an attack with a knife. Short ugly scenes. Without any pathos the unthinkable fact of death. Every person is a little universe, every death a little end of the world.

X.
The last picture. Like at the beginning, a room without the presence of men, a vase, a window. A still life. The indifference of the lifeless things as the opposite to the moving and limited (life) time of men. The cinema turns back to it´s roots, the photography. Then a fade out, which closes the room which was opened by a fade up. The credits, a traditional rite of cinema, the signs like strange cryptic signs on a gate to a space which opens and shut, in that we were only observants but in which we felt for 160 minutes the almost uncanny presence of men and things. There are films, which can not be resumed with a synopsis; thy are like rooms, in which you must have inhabited for a certain time.