The Dark I must not name by Shaan Khattau 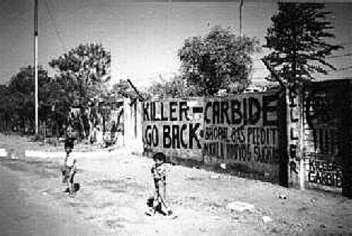 Busy life at the station of Bhopal.In a restaurant near the station, Shaan Khattau is recording with the camera the incredible skill of the waiters who have to serve a high number of guests. Some passengers are turning their heads to her, making comments. She is obviously a stranger with her camera.She is still the tourist who shall not see from the deep wound of this city.The old man at the beginning of her film invites her for sightseeing. He seems to be the living chronicle of the city Bhopal. He tells her about the history of this city. And he shows her the sights of Bhopal: the mosques and the monuments. He is kindly with her. We see that he is as well polite with other people, two old friends and a muslim who bans her kind but strictly from filming in a court of a mosque.In a tea shop, the old man tells her the names of his ancestors. She asks him further and further back about his ancestors like in a funny game of asking and responding . We hear her laughter.

It is the only time where we hear her laughing.

For a small reunion of spectators the old man is telling about that very night of the poison gas accident. He, who was not a victim remains a living chronicle. We thought, he says once that we were like in one of Hitlers gas chambers.

The streets of Bhopal by night. Neon light and a big wall advertising Coca Cola. We hear religious singing from a mosque or from one of the rooftops. She senses immediately sublime tracks of sadness between the surface of the city´s domestic business.. She is not a tourist anymore. She comes closer to the hidden memories under the surface of the city.

She walks with her camera through the deserted and desolated chemical factory. This factory of the multinational company Union Carbide is the center of the horror, the starting-point of the terrible disaster of Bhopal. In the night of December, 2, 1984, 40 tons of methyl isocyanat escaped. She is the traveller who risked to reach this centre. The floor is slippery. Her unsteady walk is transformed into the movements of the camera. I imagine that I follow her close. And with each of her steps, I am affraid she could fall.

She is gone with Sunil to the former house of his parents. This young man has lost his whole family. His girlfriend married another man, because he still suffers under the follows of the poisoned gas and he is poor. He drinks a cup of water. He is nervous and irritable. I hear her soft voice from the off. She asks him to show her the whole house. He is shouting at her. He does n´t want to be bothered by her. That is all the bitterness of a man who lost everything and just in this moment even all his hope for his future.

She is beaten too through this strong and unexpected emotion. I almost imagine how she - stiff and shocked probably with shivering knees have felt that emotion. It is a moment in which she is without the help of her ambition, her apparatus and her concept.

And even though she has n´t cut that scene, has confronted herself again and again while editing her film. Sunil who is filmed and she who films are both exposed. It is a scene that hurts me while seeing it.

Razia is a mourning muslim woman whose face is almost completely hidden under a black veil. Razia walks through a parklike landscape of a mosque. She follows her with the camera. Razia does not talk with her but is reciting something for herself. I think she is praying., probably for the dead in her family. She can´t do anything than realizing and watching the mourning muslim- and stay silent.

She walks with the camera through a hospital that seems almost deserted.Eternal long corridors, empty beds on which are signed: MIC, the gas that demanded so much death and injured. Corps of human babies and foetuses are conserved in glass jars.I imagine how she, having a concept in mind while editing her images, has lived again all the real nightmares.

In the colony of widows which looks like an isolated ghetto, she encounters women who have lost everything - like Sunil. One of them says, that god is the only one who is left to her. The women are mourning. They are still sick from the follows of the poisoned gas.Once we see Sunil, who looks moved.

In an apartment of one of these old women I recognized her.She can´t console them in their mourning, can´t help them.

Later, she encounters the anger. Woman are reunited to an association. They are full of anger:against the americans whose chemical factory has destroyed their life,against the indian government, who allowed them to build the factory and who let the victims alone.When their protest movement weakened, politics have left them. There are no elections at the moment.Some of them say that they will fight until death.She is beaten by this power of bitterness, anger and sorrow.She can only react with her camera which is recording something for what she won´t find words. The video camera is her diary of images and sounds.

Children who know about the accident only from telling are playing "gas, gas...". They imitate what they never experienced, because they don´t know how it is to dy. History presses itself on the surface of present.

In the last part of the film she is showing photographs of the dead victims. Under every picture is a number.They seem like an anonymous mass grave. The paper sheets on which the pictures are sticked are already in the process of its decay. I don´t know what she has felt at that very moment.The photographs of the dead seemed to be long and bad conserved, like the officials had them forgotten. They are burnt into my memory like the mourning and the anger of the surviving victims.

The station master tells her that all victims could have been rescued when the alarm ring had been released earlier. The previous station master, he says, tried his best to rescue as much people from the station as possible. Even passengers in the express train which passed accidentally at that very day on December,2, 1984 are among the victims.

The last image presents an express train which passes over. What she may have thought and felt while editing her film - I don´t know.

A train passes - nothing else.Like in a film by Ozu. An image without symbol, without meaning.
And I can´t think about anything else that the train which passed through Bhopal at the night of December 2, 1984 meant for so much passengers the death.

She was looking in her film, during her voyage to Bhopal for an own attitude about what She had experienced.I don´ t know if she has found this attitude.

I am moved by her search.

When her concept, her idea about her film was often in danger to brak down under the power of the real anger and mourning of the people that she has met, she went on continuing..These are the moments which touched me deepest.She has confronted herself - and sometimes even without any protection - with the anger and mourning.Her film is not only telling about what she has seen but also that she has really - and independent from the apparatus of image-making - experienced and felt something.We can recapitulate her experiences.

I feel confidence for her film.