Provisorily translation of a text on DEAR PYONGYANG 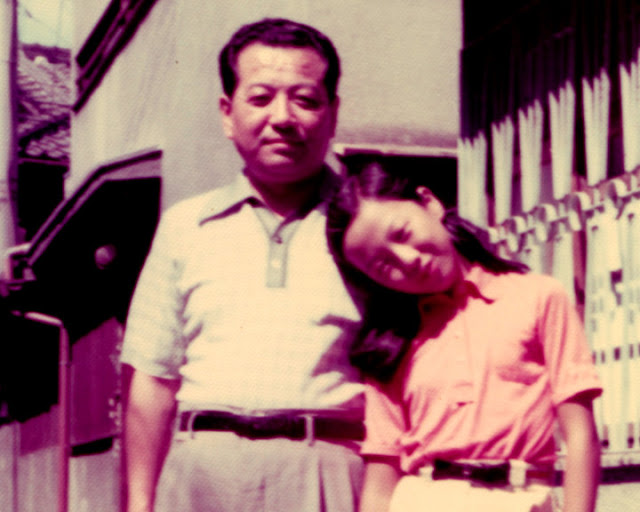 Another film I can´t get out of my mind, Dear Pyongyang by Yang Yonghi.
This film reminds me in some films which are in its reduction of the image-making gadget and in its transparency it is winning intensity through the lack of a big distance between the vulnerable individual who films and the spectator.

It is the story of the filmmaker which begins with a historical introduction on Koreans living in Japan. After the Korean civil war, this comunity is divided in followers who identify themselves as North Koreans and those who consider South Korea as their homeland. Encouraged through the economical growth in North Korea, a lot of "North Koreans" living in Japan went to Northkorea, or in other words "returned". Yangs father sent his three adolescent sons to Pyongyang. They can be visited there but they can never leave the country.

The film is now focusing completely on Yangs family where history occurs in small details of an average family and finally about Yang Yong-hi herself. Since he was a young man, Yangs father remained a communistic activist and whenever he talks about Northkorea, he talks about a mythic paradise. The films presents every day situations and the travels of the family to the now adult sons.
The filmmaker (we learn from her off-commentary) was for a long time trying to lead a different life, without serving her "homeland" unconditionally.
The long conversations between her and her father are seemingly banal at the first sight, sometimes even funny. But after some time we feel the drama beneath the surface of seemingly harmless little quarrels between father and daughter. The first impact arrives when Yang interrupts these long conversations with a serial of shots of family photographs. On one of these photographs, we see the very young Yang Yonghi beside her brothers during her first visit in Pyongyang. Her face looks sad and she must have cried. The separation from her brothers must have meant to her a very traumatic experience. She can´t even talk in the off-commentary about all what moved her. The traditional parental love and her worries about the brothers who live in a country where every small contact with outside is observed with mistrust hemmed in her a more open rebellion. There is also the fear of lack of love when she doesn´t conform the expectations of her parents.

When I saw the film the first two times, it took place in closed press screenings. Just the third time, I saw this film in an open Berlinale-screening. At the beginning I still found the small quarrels between her and her father amusing.
While seeing the film third time, I could not laugh anymore.

Except her hands we see Yang Yonghi only on children- and youth photographs and listen to her voice. Everything we see, we see through her eyes. For me, the leaps through time forth and backwards seem the essential accents which gives the film a kind of poetry. It seems to me the aesthetical form of some one who tries to tell about herself on different levels what is difficult to put in only in words.
This kind of insight into the intimate sphere of a family which doesn´t work for me in every documentary, evokes the feeling that someone tells us confidential things. The film develops an unique drama between her discomfort not to fit in her parents expectations in her commentary contrasts with her fine observations of her family every day life. Yang is part of this family and at the same time an outsider.

A sudden cut and we see a hospital. Yangs father has suffered under a heavy stroke. There is an intense moment of helplessness which is burnt into my memory. Yang Yonghi goes wit the camera to her father´s bed whose body is connected with tubes and lines to medical machines. It looks bad for him. He is totally defenceless exposed to her daughter´s views and ours. At the same time we know through the film that the father made decisions (even without bad intention) under which her daughter suffered a lot. Then she holds with one hand her fathers hands while his voice makes uncomrehensibles noises and at the same time her other hand serves the the small video camera. When I saw the film the first time, I wasn´t sure if someone should get as far. But nevertheless this moment moved me deeply.
This moment is very close to the undefinable feeling to be left alone with a personal sad event, like I experienced on that terrible day in 1997 when I visited my seriously sick mother at the emergency station of a hospital in my hometown Bochum. The feeling of discomfort about the power parents had at least for a special period in our lives is contrasted with the helpless fragile body of the father. What makes this scene even harder to bear is that the filmmaker is exposed too even if we see only her hands. I even think, I heard her crying, but I don´t know for sure.
I don´t know anything at all anymore.
I forgot the big screen and the seat where I was sitting. I was totally divided in the terrible memory of my mother and the awareness that here in this recorded moment, the invisible filmmaker Yang Yong-hi experienced one of the most terrible moments of her life. Because of the fact we can´t see her face, in my imagination she is metamorphosed back into the sad young girl which we saw on a photograph.

an english text on Yang´s second film is here
Posted by shomingeki at 1:25 PM