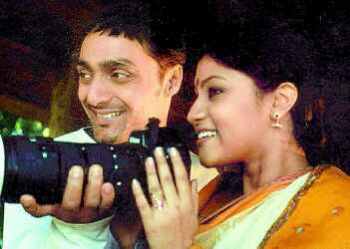 " He wrote me from San Francisco: Recently I made a pilgrimage of warching 17 times VERTIGO by Alfred Hitchcock" (from SANS SOLEIL by Chris Marker)

I remember it was just an impulse I followed in early 2005 to see some more recent films from India. It was March and I planned my first travel to India in coming November 2006.On the Berlin Film festival I saw Shonali Boses AMU with Konkona Sen Sharma. I did not know that she was the daughter of Aparna Sen, nor anything else about her. But I knew already two films by Aparna Sen, read in the staff info of the AMU-press-kit that she played as well in a film by Aparna Sen and I gave it a try, ordered the English DVD from Amazon (which was quite expensive) and watched it at the day it arrived. That was anything else than love at the first sight, just enough not to hate this film. I even intended to resell it at the Amazon marketplace soon. Means, the film passed by without evoking anything in me. But I saw it a second time - and I don´t know why - with the same result. My sub-conscience still pushed me to give it another try, even though my mind was sure it won´t change a bit. But than came a beautiful Sunday morning, I think it was even Eastern. I stand up early, took a hot bath, made a wonderful breakfast with ham, eggs and Darjeering first flush. And it was a total different film! One little interaction during the bus travel in the film between a mumbling old Muslim gentleman and a Teen girl called Kushboo blew me suddenly away. I found the key to this film, a really entrance. From now on and 11 weeks in a row I saw MR. and MRS. IYER every Sunday morning and the film became better and better and was as well a trip through everything in cinema I love. Even though the outstanding performances of Rahul Bose (as sovereign like Henry Fonda in some films by John Ford) and Konkona Sen Sharma who appeared to me as the reincarnation of the chinese actress Ruan Ling Yu gives one of her most soulful performances - it was Kushboo I had a quite a crush on. And she appears only in some scenes. And Anjan Dutt as an indian Jew sticks with me until the end of my life.After seeing this film around 8 times, I slowly began to understand that it is really a damn good film, First it reminded me in the „group dynamic“ storytelling of John Ford and than again in Ozus incredible justice for his characters. After 10 times I haven´t watched anymore a film but made a journey. My soul wandered inside the characters. Sometimes I was Meenakshi, sometimes Raja but mostly I saw this film from the point of view of the baby Santanam. Later I felt like Cohen, Kushboo, the old Muslim couple, the unhappy Jew Cohen or finally the stressed policeman.

And if I consider the whole case a  bit more precise than this film is already a masterpiece because of the 30 minutes long bus travel. And later I even thought what kind of fest must have been this film for French philosopher Gilles Deleuze who considered a filmmaker like a philosopher.I learned through this film to define my love for cinema and I even understood why I am rather uncomfortable with most of film theory. Beside poetry, storytelling etc, I believe every good film has included (even though encoded) its own theory on cinema.

The first lesson I learned that there is no real objective film criticism. If you find and access into a film or not - it is often a game of luck. And all the knowledge we have probably collected over years or even over decades is worthless and rather a burden than a tool if your mind is always predetermined. When I finally got my access into this film than - of course my modest knowledge about cinema became useful. And MR. AND MRS. IYER became for me a film which I could enjoy, emotionally as intellectually.

One of the basic ideas of my long review in shomingeki No. 18 was the analogy of Meenakshi and Raja and the spectators. Even if the story offers the option of a romance and even the dream of it - Raja and Meenakshi never come together as a couple and finally they have to go apart and all the dreams they probably have of each other are like the dreams films can evoke in us when we leave the film theatre and continue to live our life.

One evidence for me how Aparna Sen uses genre conventions especially from Road Movies (may it be a drama, a comedy or a western) and turns it in the next moment to something very special and unique leads to one of the most sophisticated scenes about storytelling and cinema I ever have seen.Raja and Meenakshi have to pretend to be a married couple because Rajas life is in serious danger. He is Muslim and they are stuck in a HIndu-dominated region. This kind of role play is at first common especially in Road Movies. We have the example IT HAPPENED ONE NIGHT by Frank Capra (1934) and as well in Yoji Yamadas THE YELLOW HANDKERCHIEF (1977) But this time the motivation of the role play is a game of life and death. That leads to a scene which is for me a kind of icon of cinematic poetry and cinematic intelligence at the same time. During their trip they spent tea time with some of the teen girls they know from the bus travel. And this girls are eager to hear the story of Meenakshis and Rajas love. First Raja hesitates but than he is spinning a story of love with honeymoons in Kerala under the lights of oil lambs or full moon. The audience and the "couple" know that this story is fake but at the same time we are almost seduced by Rahul Boses/Rajas invented story of a honeymoon which never took place. For a moment Meenakshi is quiet and when Raja asks her if "they needed oil lamps or not) she looks at him like just awakened from a day dream. Just her (Konkona sen Sharmas/Meenakshi glance at him blew me away. Yes there are a lot of examples ho Aparna Sen is mastering here the very very small line between enchantment and cheating the audience in an nearly Ozu-like brilliance:The last part of their voyage by train seems to bring them together. In the gangway he touches her face and we wait for the first kiss. But then a passenger wants to pass the small way, disturbs them and then a hard and sharp cut. We see them in their compartment. It is morning and some hours must have passed by. Not the least advice if they had "continued" last night or not but instead a small hint how different they are. Meenakshi will continue to drip her water in the traditional Hindu-kind without touching with her lips the bottle.Another moment is when Raja leaves the train at a station with a longer halt to buy coffee. Suddenly she fears he has left her. Then he comes back takes the Baby out of her into his arms and sits beside her. She leans her head on his shoulder - and then again a very sharp cut - and we are at the end of the travel at the station in Kolkata. That is  one of the most heartbreaking cuts I ever saw in my whole life.In the year 2005 this film occupied my mind for six months! Okay I found some willing victims whom I could tell about the film and my impressions. To survive I knew I had to write on this film or I had to go nuts.First I made an endless brainstorm version. There was still no clear intention to publish a text on this film because the next issue was already occupied  for Ghataks refugee-trilogy and some other stuff. I don´t know how I managed it, because just the next Berlin Film festival brought me two other crushes with two other films. And while preparing after the film festival the Ritwik Ghatak issue I had to deal as well with my text on MR. AND MRS. IYER and two other texts on films which blew me likely away for the over-next issue which finally came out October 2006 two weeks before my first (of three) India-trips. And if I count Mr, and Mrs. Iyer, I was already 4 times in India.

I am still embarrassed that I recognized in MR. AND MRS: IYER not at the time as the masterpiece that it is but I have to live with this shame. This year another of my most loved films by Aparna Sen THE JAPANESE WIFE had it much easier to conquer my heart. But this is another story. 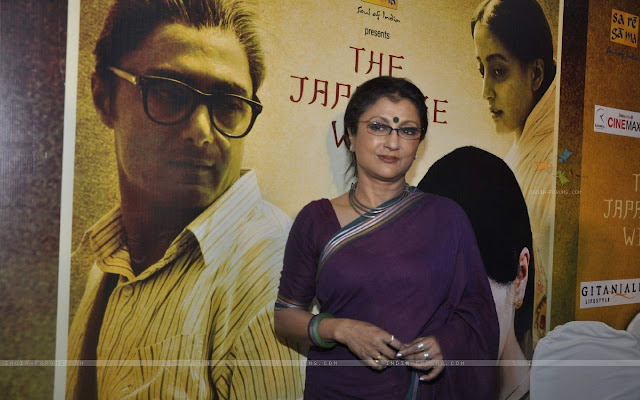 THE JAPANESE WIFE conquered my heart at least after the second viewing. This time I intended to write on it. Working on the first draft of my reviw on this film was a nightmare, just cramp and lack of inspiration. On the next day something wonderful and accidental happened: Two little 5 years old girls from my neighbourhood wanted to watch on my DVD player SHREK (!) And - what a wonder I wrote like never before and even though I had to go at least 5 times to my DVD player, because the DVD the kids brought was not working very well. I sat in my kitchen in was in my „The-Japanese Wife-World“, the kids enjoyed SHREK. The magic aspect of this day was, I came much closer to „Mashi“ , a widow without a family who creates a kind of invented family for her. When I thought about the two little girls, who could be my daughters (or almost grand daughters) I felt I found a magic door to this film. The version I wrote on this day, survived almost to 90 % in the final published version. I was concentrated on my text and at the same time connected to the world through the little girls (Kids and cats like me and I do not know why). That is one reason I am very fond of the story Aparna Sen often tells, the writing of the scipt of MR. AND MRS. IYER on her daughters computer and in her room.
This day I wrote on THE JAPANESE WIFE was one of the rare beautiful experiences of writing on films. It was like I „lived“ the film for a while.
Another accident happened. In the print version I forgot to put the title of the from the film still (which also hadn´t a very high quality. But than I realized this picture looked like a film still in the vitrines of the old now closed or even deconstructed film theatres of my youth. And like I wrote in the review, it helped to dream myself in all the wonderful film theatres which are not existing anymore. I miss to have seen this wonderful film on the big screen but this lack evoked at the same time an eternal longing, a term which is also one of the keys to this film.

Rüdiger Tomczak
a long text on MR. and Mrs. Iyer is here, and a text on The Japanese Wife is there.

Posted by shomingeki at 4:26 PM