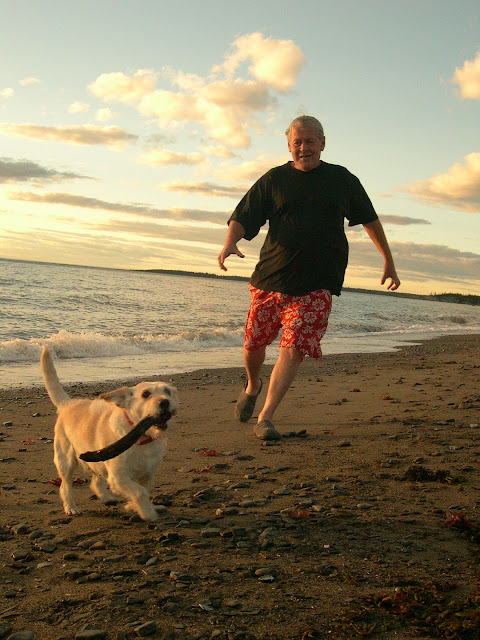 I can not be present this evening.
I couldn´t be present at his funeral celebration.
And I was not there at his very last day on August, 17.
But despite the big geographical distance between Claude and me, I felt always close to him since I got to know him.
As a renown distributor, producer and connisseur of Independent cinema, I owe him most of my knowledge about Quebecian cinema. Through him only, I encountered the work of several young and talented filmmakers who deserve to be discovered abroad.
Claude was one of the very few distributors with whom I could talk about cinema as much more than a business. Despite producing and distributing independent cinema is a hard business to run, Claude had a big passion for cinema as a creative work.
People like me who run a film magazine independent from adverticements, all non private sponsorship and the much more trist reality in what kind of films are released in my country or what kind not have often the reputation as hopeless dreaamers. And here again, Claude had as well a big heart for "this dreamers" - even more - he took them serious like he did his own business, a business which is much more contronted with the taugh reality of cinema surrounded by economic limitations.
*
I met Claude first by accident at the Festival des films du Monde, 1995, introduced by another dear friend Claude R. Blouin and also by a review I wrote one year ago on the first feature film by François Delisle called RUTH, which was distributed by his former company, the collective Cinéma Libre. I didn´t care much what people in my country thought about my new born love for quebecian cinema, mostly unknown in Europe, sometimes even in frankophone countries.
My biggest reward was that I got to know Claude Forget who gave me not only a deep insight into cinéma quebecoise but as well in the life and history of Quebec.
And I had also the pleasure to get to know him as a person and it is not possible for me to make a difference between Claude as a passionate activist in cinema and him as a person.
At the time, I met him the first times, I was rather dogmatic in what and how cinema should be. For Claude, a film must be at first alive than it can be a good or even a great film. A film can fail but a try of a young filmmaker to express something or even to try was always worth to be listened and watched.

*
One year later, 1996 I spent almost one week with Claude, in his office and I was a guest in his former appartment at the quarter Saint-Henri.
I realised one thing, Claude couldn´t only accept films in their very different forms. He as well took people he loved like they are and not like he wished they should be.

*
I remember the year 2002 the only time when I met Claude during the Berlin Filmfestival. One night we had a private party in my appartment with Claude, a colleague from Cinéma Libre, a young french-canadian couple Claude just met by accident in Berlin, and friends of mine: a japanese couple, (both filmcritics) and a filmmaker from Bangladesh. He always told me later how much he enjoyed this "party".
If people meet and if they having together a good time - that was always for Claude the highest thing to be approached.
I remember the evening when my friend from Bangladesh Shahen Dill-Riaz showed his first film for Claude, reading out the english text from the dialogue list for him.
*
In 2003 I met Claude the last time in person during my last trip to Quebec. We even spent a day in his little cottage in Saint-Juilenne and later there were some meetings in the new office of Cinéma Libre.
More than one year later after the decline of Cinéma Libre, Claude had a new Start at Paralœil in Rimouski. From now on we had to communicate through mail and phone.
I realised a new aspect of Claude, beside all his passion for his work, he had a clear sense for the essential things in life. His unconditional love for people close to him, his daughter, his grandchildren, sisters and his friends were the rewards of his life rather than the ups and downs of dealing with cinema.

*
Years later, I learned that Claude has cancer. And we talked through e-mail and phone. He seemed to be very optimistic about chances of healing. Or did I just interpret optimism for escaping being confronted how serious his deseasse really was? At the end of his life, when all hope for recovering and healing failed, Claude made another clear decision. The last weeks of his life he wantet to spent near the people closest to him, his sisters and his only daughter.

*
There is one experience I missed to have shared with Claude:
It was two years ago, during my first voyage to India. In Calcutta I was introduced by friends to the most celebrated football idol of India, Pradip Kumar "P.K. Bannerjee, a gentleman in his early seventies who just recovered from a brainstroke. I didn´t realize in this first moment who this man was, neither why my friends introduced me to this old man. Mr. Bannerjee lay on a double bed, unable to move his right arm. I was to shy to say anything and the only thing I could do was to hold his left hand. I hold his hands for about ten minutes while Mr. Bannerjee was telling me something in a very soft voice. Finally the nurse asked us to leave. I was the first one who left the house and went on the street. I was very moved and couldn´t help may eyes got filled with tears. For this very moment, I felt close to a person, I nither met before nor I ever had heard about.

I recalled this experience at my last try to phone Claude at his last day. His sister told me that he can´t speak and he is going to pass away very soon.
On this very day, August, 17, Claude was around 4000 miles away from me.
But in my imagination I feel like I hold his hand for the last time.

This text is originally written for the homage to Claude Forget at the Cinematheque Quebecois, Montreal, 13. September and is translated and slightly changed into german for shomingeki, printissue Nr. 21. part of the hommage in shomingeki No. 21 is also a text on ROGER TOUPIN, L´EPICIER VARIÈTÈ by Benoit Pilon

Posted by shomingeki at 3:52 PM

Email ThisBlogThis!Share to TwitterShare to FacebookShare to Pinterest
Labels: Homage to Claude Forget 1949 - 2008